As mentioned in one of our previous videos/blogs we’re going to talk about Instinct’s new plate carrier. The Tasmanian Tiger Plate Carrier QR LC.

As for today we’ll be talking about Instinct’s new plate carrier (the coyote brown one) and in the meanwhile we’ll be comparing it to Viper his older plate carrier the Tasmanian Tiger plate carrier MKIII (the olive drab one). This way we can show the new features and the differences between both carriers. 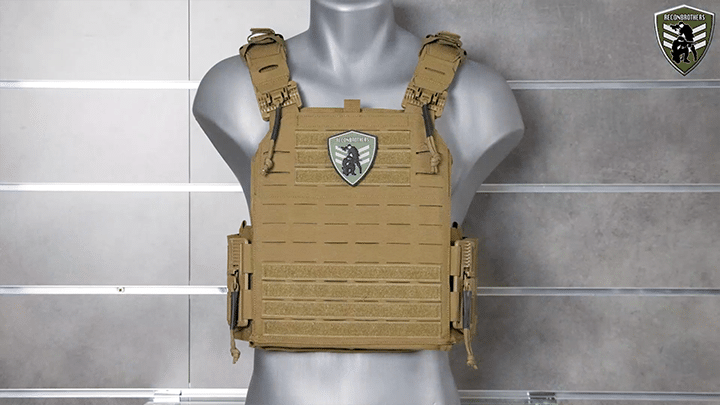 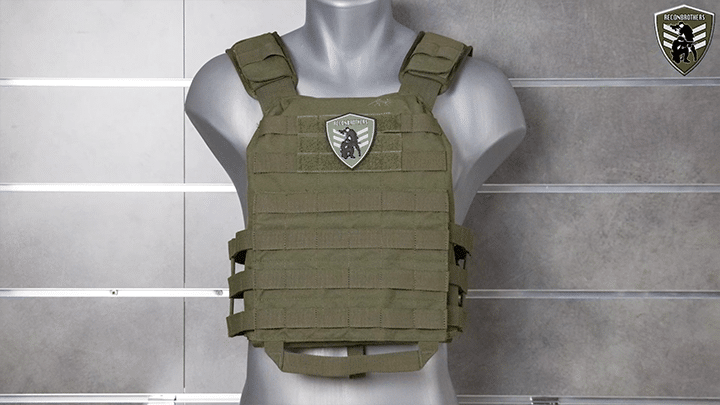 Both the QR LC and the MKIII are made of 700D Cordura® which would apparently be the ideal combination between the lightweight 500D Cordura® and the strength of the 1000D Cordura® in order to stay durable.

The QR LC carrier is a unisex carrier which weighs 1,300 grams which is 50 grams more than the MKIII. The added weight comes from the quick release systems, but to compensate that they chose to use laser cut MOLLE instead of the classic stitched MOLLE.

In practice laser-cut MOLLE is a bit harder to use, but it keeps a very smooth and clean look. If you have some troubles yourself with MOLLE-ing your pouches onto your carrier or belt, have a look at this link. Because we already made a video about how to MOLLE with some handy tips and tricks. Above that, also like the MKIII the QR LC has some nicely finished stitching. 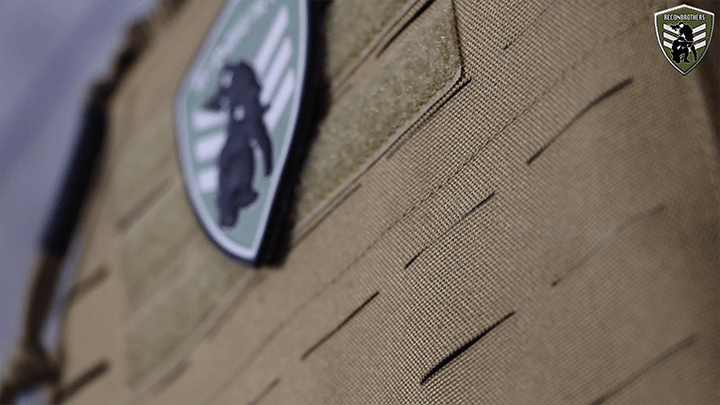 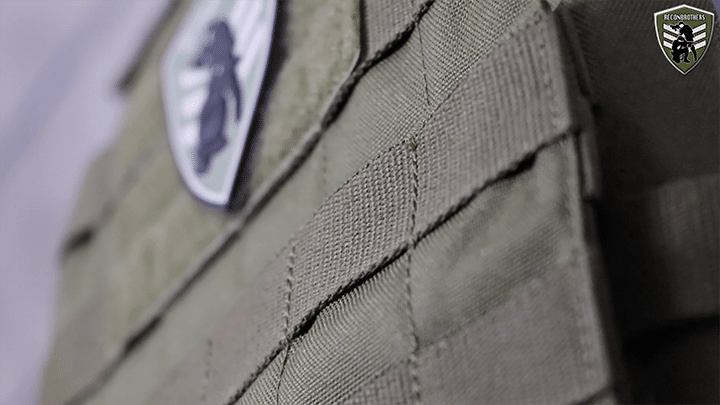 The front and back panel allow the use of SAPI sized plates and the thickness won’t be a problem as this one features a stretchy material on the side unlike with the MKIII. Also the removal and insertion of your plates has become easier than before with the MKIII. Whereas you needed to adjust multiple internal straps with Velcro, you now only need to adjust one. 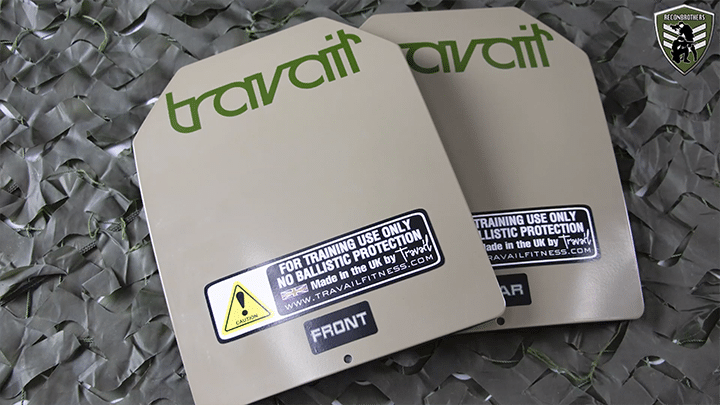 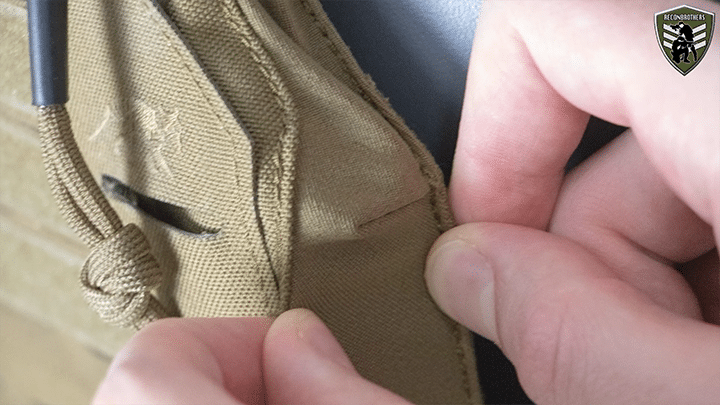 As with any backpack or plate carrier from Tasmanian Tiger, the inside features a mesh lining system for maximum ventilation in physically demanding situations. Also as mentioned before, the front and back panel feature laser-cut MOLLE on which the back panel features a 9 by 6 panel with 2 rows of MOLLE on top. Whereas the MKIII featured a Velcro loop on top. 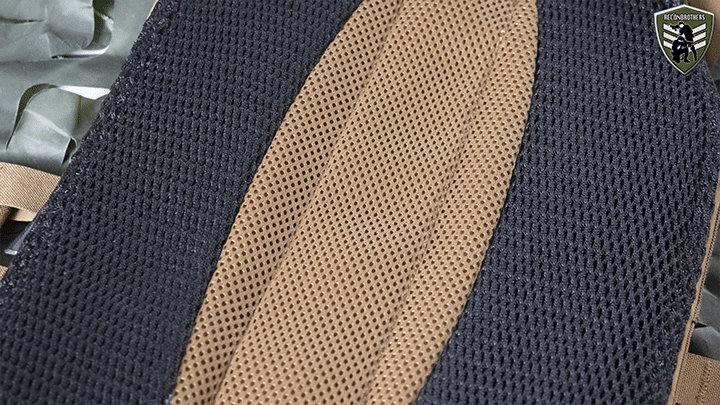 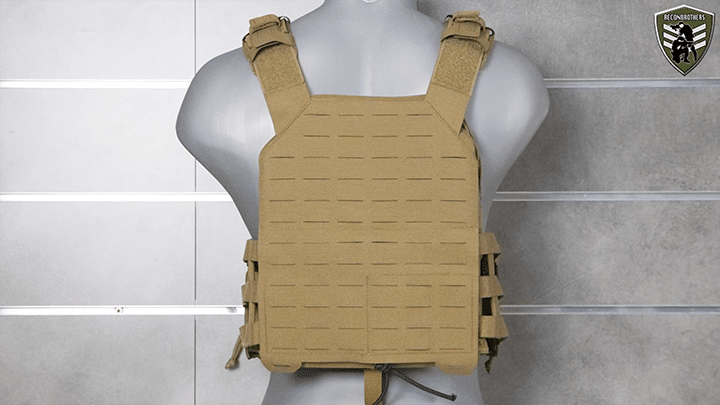 The front features a 7 by 6 panel just as the MKIII. On top of that it features a 3 by 4 panel whereas the MKIII had a 3 by 6 panel, but on the side the QR LC features 2 bigger MOLLE loops in order for you to quickly change your front panel. 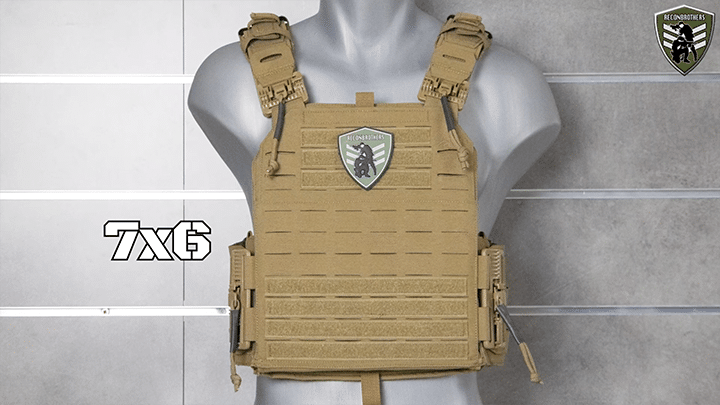 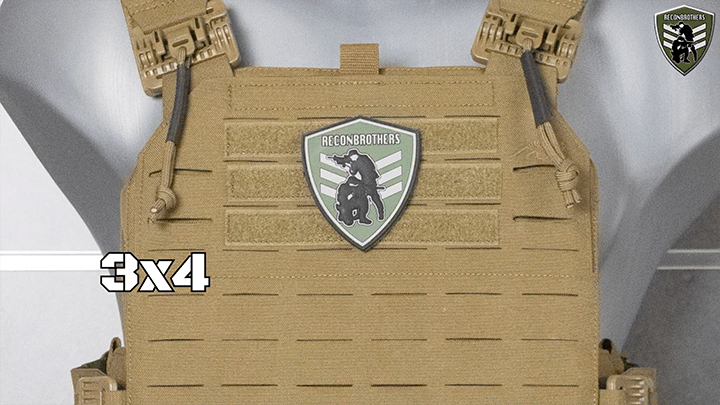 Also, in order to quickly switch your setup the bottom 4 rows feature Velcro in order for you to quickly attach or removed Velcro pouches or entire panels. 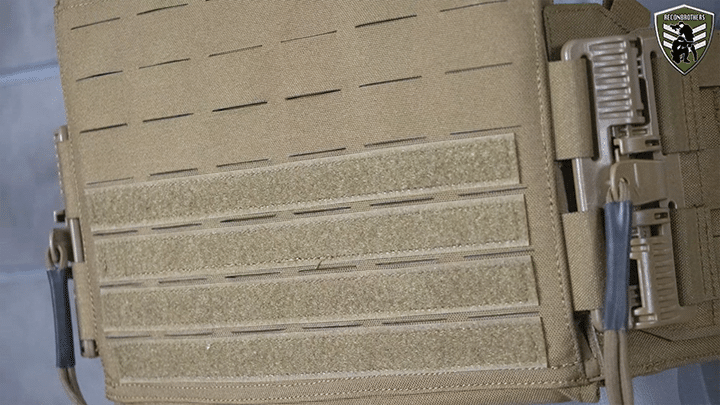 The top also features 3 rows with Velcro for you to attach your personal ID. In addition to that the QR LC features a slick admin pouch for you to store documents, maps or other small stuff. 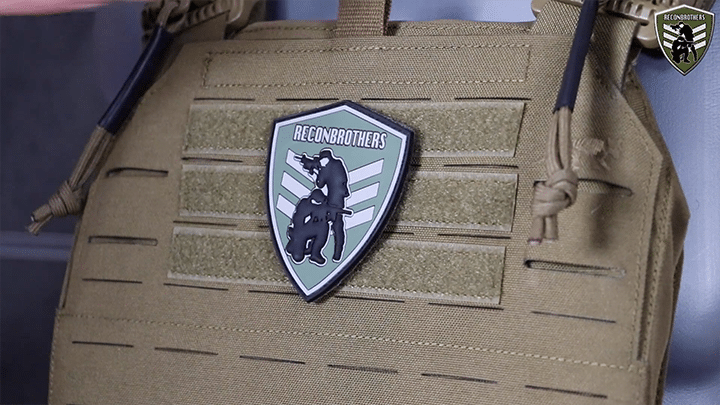 This is definitely an added value as carrying an additional admin pouch mostly interferes with your magazines or other pouches. 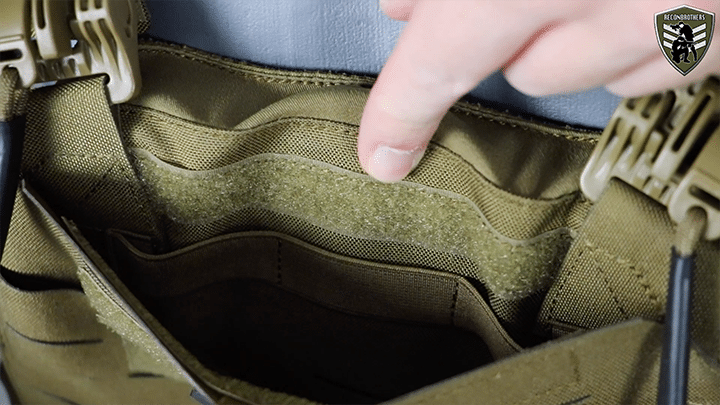 The shoulder straps have had some improvements as well. Just as with the MKIII., they’re adjustable but the way to do it is way easier.

The shoulder pads also feature mesh for venting unlike the MKIII. In addition to that, you can also easily fixate your tubes and wires. 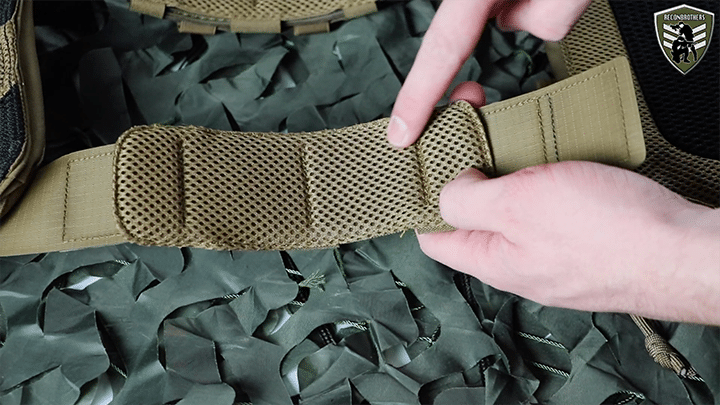 Now, due to how the new shoulder straps are designed they have the ability to slide out of position while the MKIII version has fully fixed shoulder straps. Although our experience says that it doesn’t happen that often.

The new shoulder straps also feature a quick-release system on both sides which are made of a very strong plastic and are very easy in use for you to quickly remove your carrier. 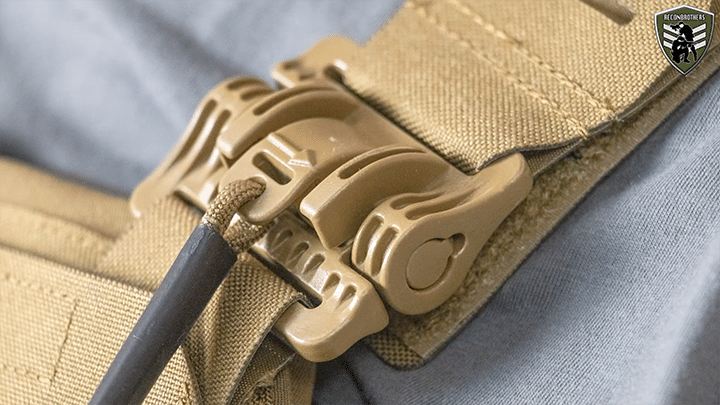 The cummerbunds you get with this QR LC plate carrier, are both the one with vented sides as well as one with closed sides which allow you to use side plates. 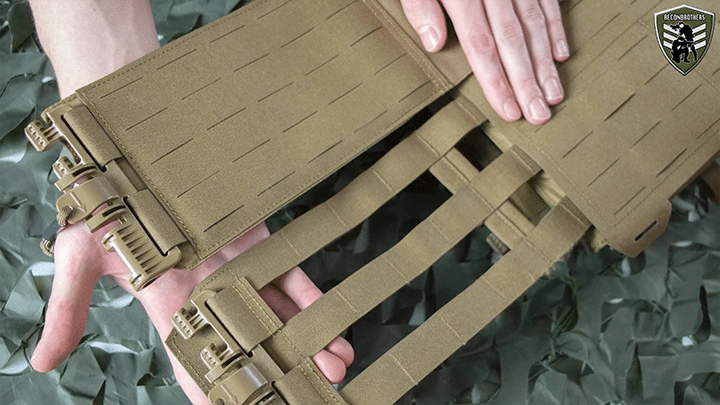 The cummerbunds are also length adjustable through the back panel, but overall this is harder to do than with the MKIII. 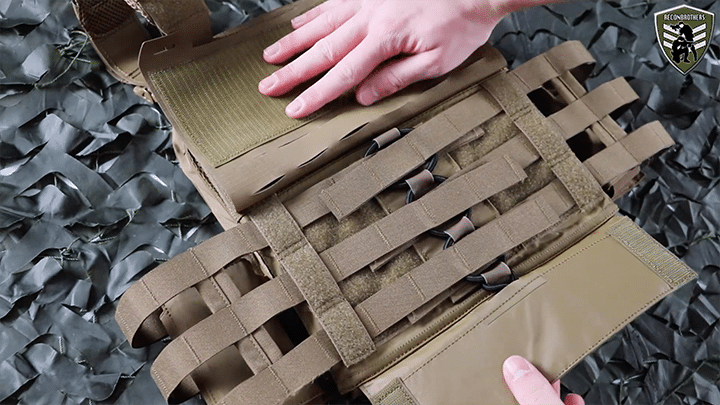 Just as the shoulders, both cummerbunds feature a quick-release system which is not only very easy in usage, it also allows for a silent removal of the carrier. Unlike with the MKIII which has cummerbunds with Velcro that have there own particular loud sound. 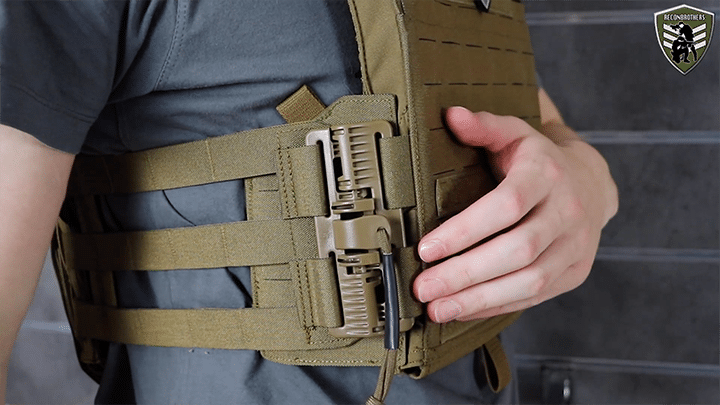 Another good thing about the quick-release system is that you will always have the exact same fit as when it was fitted to you. Only downside is, when you start wearing more layers depending on the weather it might get a too tight fit and you need to adjust the whole thing on the back again. 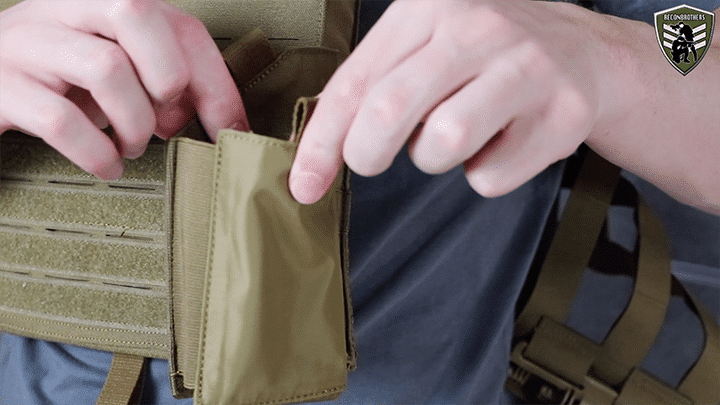 These are ideal to store your radio system (which makes it easy accessible) or for additional magazines for example. The downside is that these pockets are pretty big and have no retention, so you need an additional fixation in order to not lose your stuff. Anyway due to your radio for example sitting close to your body it might feel like it’s pushing against your ribs. Some may like it others may not, at least Instinct is liking it this way thus far.

In overall the QR LC plate carrier shows a lot of improvements compared to the MKIII Instinct used to use. It’s a very lightweight and comfortable plate carrier with a slim design and a small profile which allows for a lot of movement capabilities. 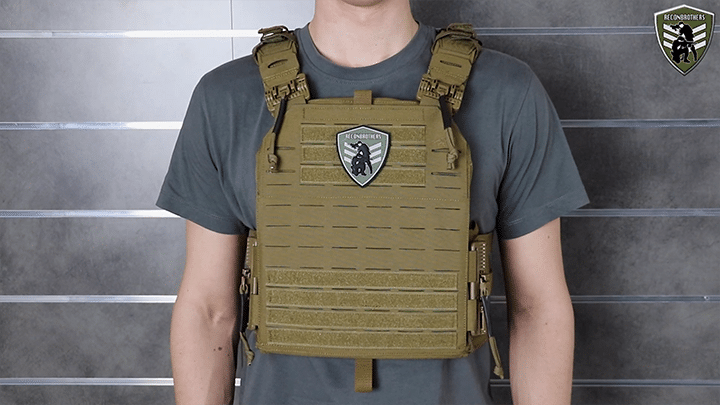 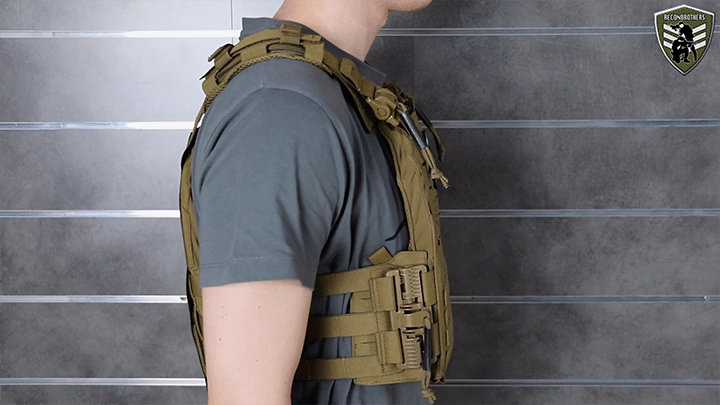 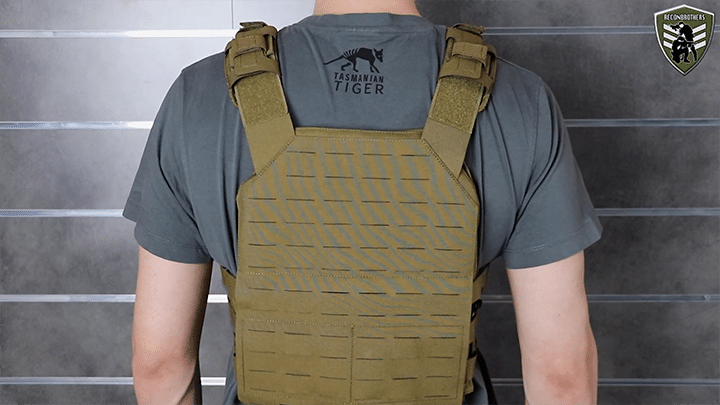 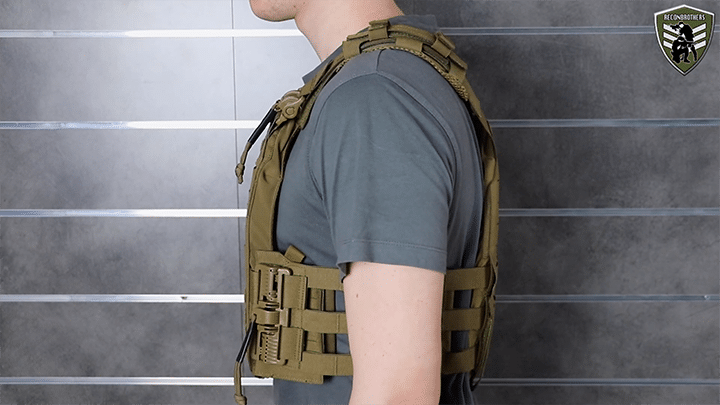 By the way, if you guys want to learn more about fitting your plate carrier, setting it up and testing your setup have a look at a link in the image as we made a video about that already in the past. 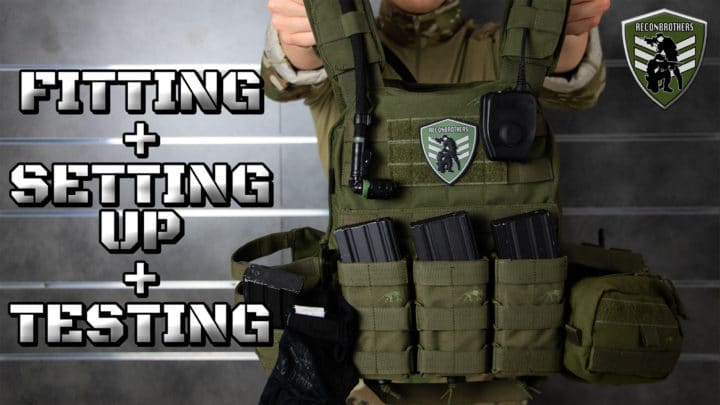 If you’re looking for either carriers you can find them at our online store, shop.reconbrothers.com, they are both available in a Coyote Brown, Olive Drab and Black version.