Is It Worth Getting a Tokyo Marui Next-Gen Recoil Shock

Is It Worth Getting a Tokyo Marui Next-Gen Recoil Shock

As some of you guys may know me and my brother have been running a Tokyo Marui NGRS system for about 3 years before we got ourselves into the GBBRs. Of which 1 year we ran them fully stock out of the box. So we think it’s safe to say that we have enough experience to answer the question of today: Is it worth getting a Tokyo Marui NGRS?

But before we dig into this subject, make sure to subscribe to our blog page by filling in the form. Also Make sure to visit our Youtube Channel by clicking the button. Have a look at our store shop.reconbrothers.com for your quality tactical stuff.

What models did we use? 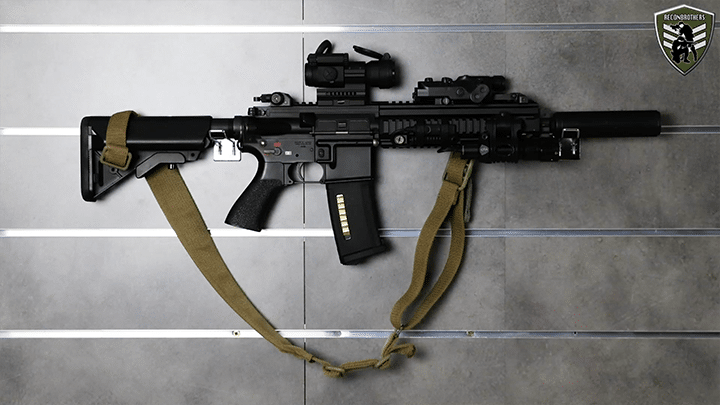 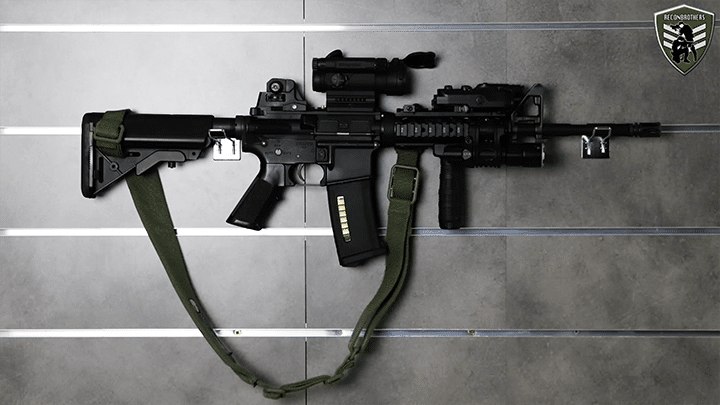 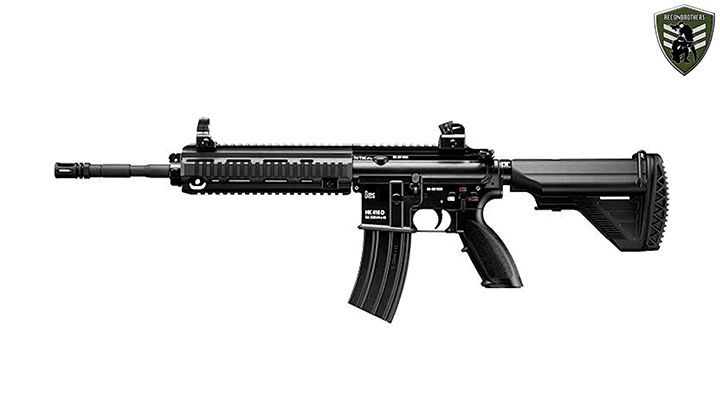 We know these guns are not cheap, they come with a price tag of about 500 to 600 bucks a piece and that’s without spare magazines and batteries. Obviously you want to know whether they’re worth to buy or not before spending such an amount of money. So in this blog we will bring out the positives and the negatives of the NGRS series so you can make up your mind before spending quite an amount of money on such a higher-end gun.

Without any further ado let’s talk about how they are out of the box.

Out of the box build & Performance

If there’s one thing to say about these guns is that they have a solid build and are made of quality materials. If you drop them, they will still probably work. An example is that Viper once fell with his full body weight and his barrel first into the dirt and it’s still running fine.

Knowing that it’s a TM you can rely on it having a very good hop-up system which can be accessed by pulling back the charging handle whereafter you can access the very well built hop-up dial created by Tokyo Marui. 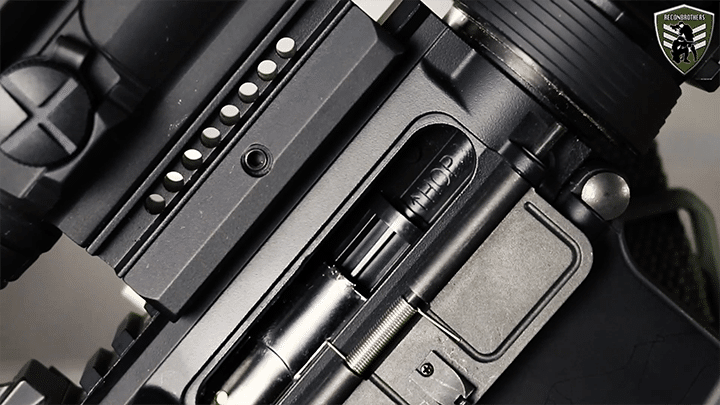 From that hop-up system and the rest of the gun comes a very good consistent performing gun. In fact we once tested this on a range comparing it to other AEGs and comparing it to the systema PTW. The Systema only shot 4 meters further in effective range and had a 6% better grouping. So, that’s actually quite good for a gun that only cost 1/3 or 1/4 of a Systema.

If you want to have a look at this comparison video/blog you can click the image on the right. 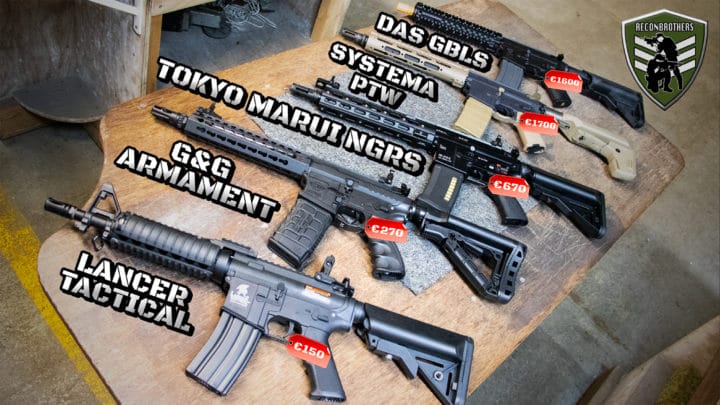 The out-of-the-box FPS of these guns is quite low due to a Japanese law stating that they can only shoot 300 FPS with 0.20 gram BBs. However, this doesn’t mean these guns are not competitive, because they outperform most on the market. We do however recommend to use 0.25 gram BBs with an out of the box NGRS gun.

In our eyes these guns are the ideal system between the reliability of an AEG and the realism of a GBBR. In fact these guns where our step towards the GBBRs. This because they feature a bolt-catch, a small recoil and their magazines can be put on 30 rounds as well.

However do notice that all these functions are basically mock. The charging handle only travels half the distance it usually should, the recoil is a nice addition to the classic AEGs, but it’s nothing compared to the GBBR, the bolt-catch does its work fine, but it’s so light that it’s hard to feel whether you’ve hit it or not and the trigger wall is not existing due to it being an AEG. 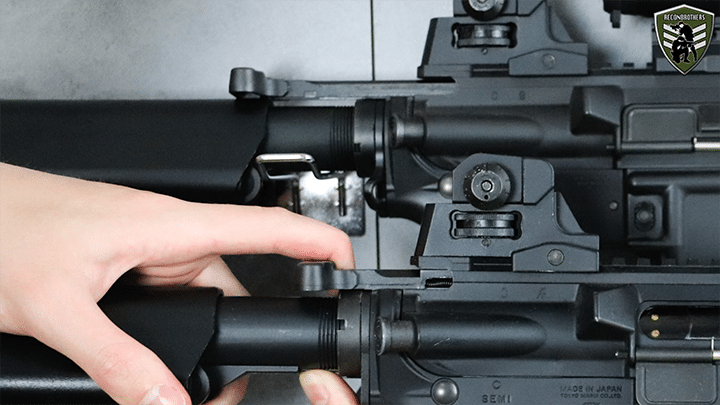 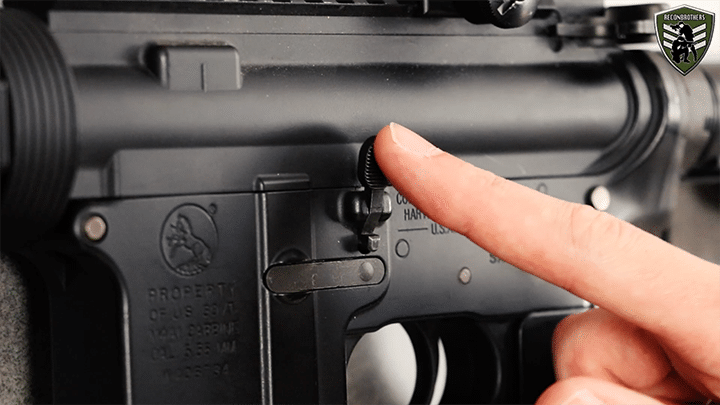 Unlike most other AEGs on the market, these only accept magazines specially created for the NGRS series which can both be put on low as well as mid capacity, being 30 or 83 rounds. This is the ideal step to go to real capacity magazines. In addition they don’t have any feeding issues and they have no loss of BBs, since you can fully shoot them empty.

A minor disadvantage of these magazines due to their design is the fact that these lips can be easily bent when you drop them, this makes them utterly useless. 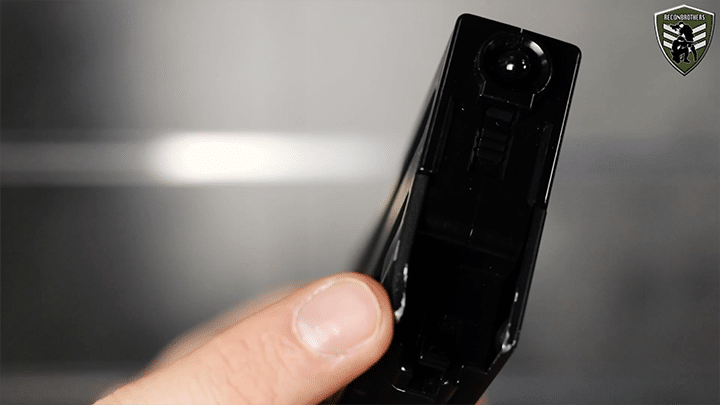 An alternative are the PTS EPM magazines which can both hold 30 and 120 rounds, the good thing is that it’s made of polymer which makes these lips less fragile, but they do break easier on the inside. 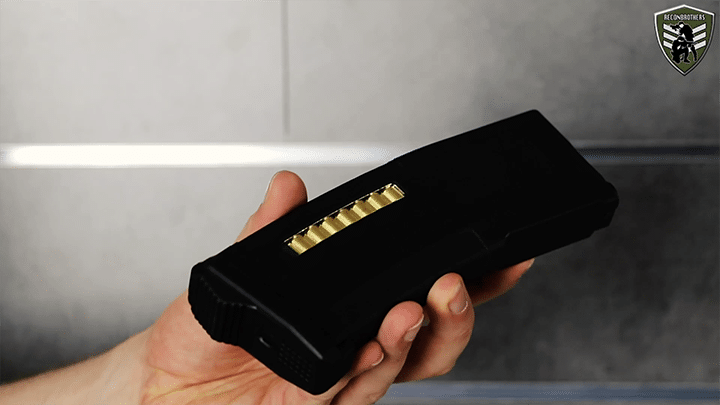 Another disadvantage of these magazines is that switching between 30 and 120 rounds isn’t as practical as with Tokyo Marui ones. This because these magazines feature a lot of aesthetical parts that are just a hassle to deal with. 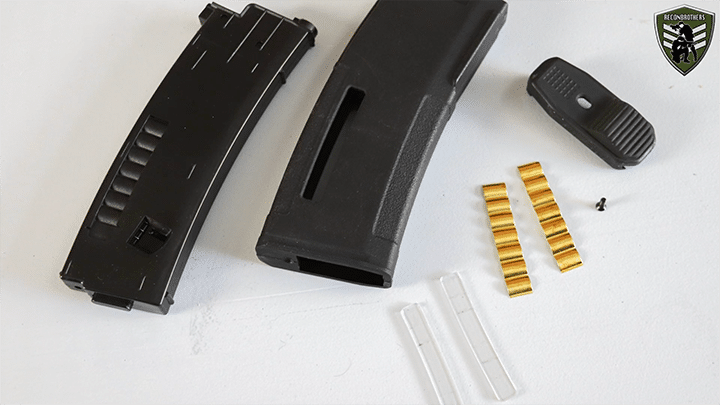 Talking about the balance of this gun, it is mainly focused on the pistol grip due to the motor being placed over here. This can put a lot of stress on your wrist, especially due to the beloved M4 standard pistol grip. 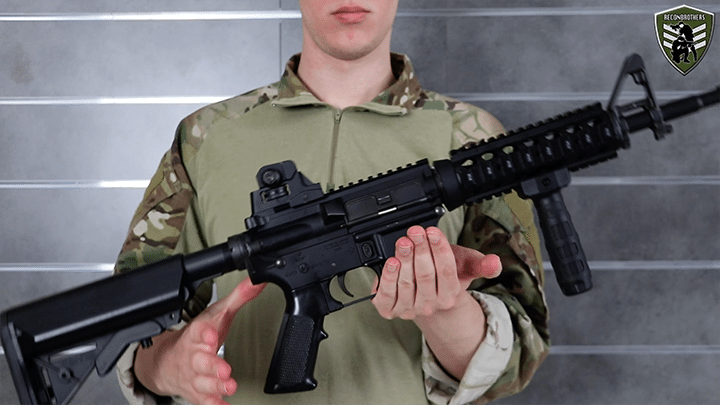 Unfortunately most of the NGRS models require you to get a specially designed NGRS series battery. These batteries are expensive, but they’re also very convenient in use. It’s just a matter of sliding them into the crain buttstock. 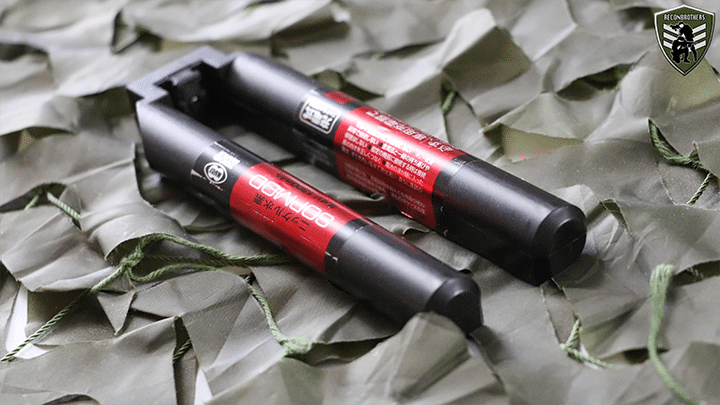 However we do recommend you to get yourself a lipo mod with some lipo batteries, considering the fact that you would need 2 of these for a full day of Airsoft. 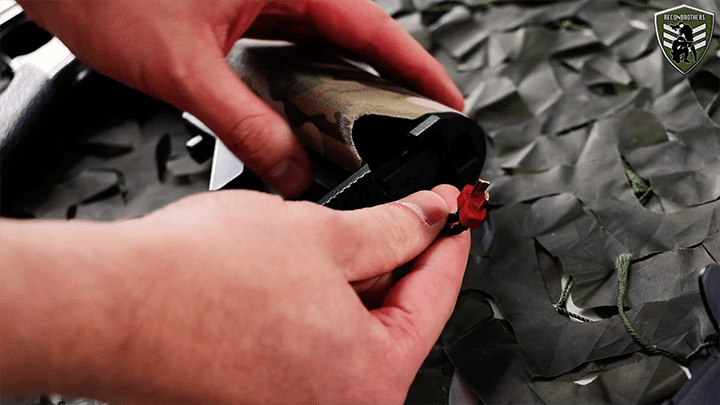 A small issue noticed by a lot of players, using it on semi, is that it sometimes doesn’t fully cycle. This is caused by not fully pulling the trigger and can be easily solved by shooting on full auto for a second or it can be permanently solved by installing a MOSFET that tracks the cycle of the gearbox.

Another thing we noticed on the Sopmod handguard is that it tends to come loose if you put some torque on it. You can tighten it by using a castle nut wrench. This also applies for the buffer tube on all the models but that is less common. 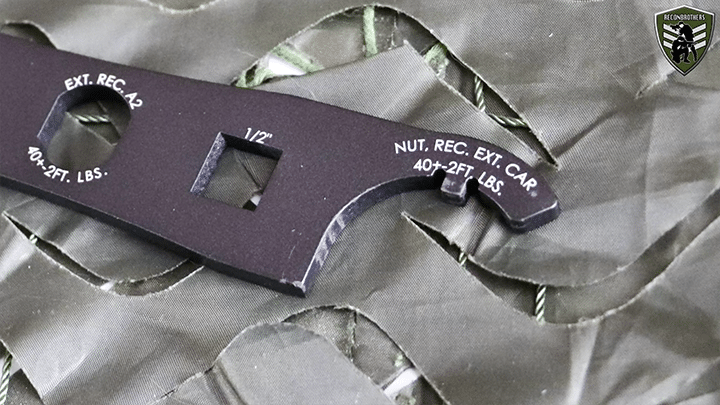 That was it for our findings regarding the NGRS models, now let’s talk a bit about upgrades.

Recommended upgrades for the NGRS series

These days upgrades are kind of standard when you buy a new gun and we already had some questions of you guys asking what pieces you best change from these models. Our recommendation when it comes to this is to not do anything. Except maybe the lipo mod to save you from buying the expensive Tokyo Marui batteries.

For the rest run it as it comes and if you want to do some upgrades, keep it to an absolute minimum. The more you mess with them, the more likely you will have some problems later on. Due to them being such a complex system. They are already amongst the higher-end guns on the market and they have their reasons to be amongst the best ones as well.

Also if you don’t have any experience taking apart an NGRS gun, don’t try it yourself because there’s a high chance you break something or put something back together wrongly because it’s such a complex system. Have it done by somebody who has a lot of tech experience on these kind of guns.

If you want a higher FPS output you will require a special spring for the NGRS series. For example the M 100 Eagle6 spring. Which will give you an FPS output of about 350 FPS with 0.20 gram BBs. We do however recommend you to use 0.28 gram BBs if you do the upgrade.

Another optional upgrade is a MOSFET for the safety of the entire system. Do notice since we’re talking about an NGRS system, you will require a specific MOSFET. Either the Black Talon Spectre or the Gate Titan MOSFETs. 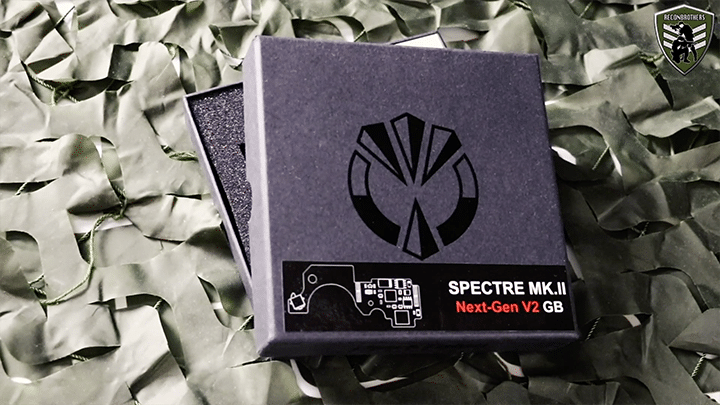 People telling you to change the piston, gear, motor, etc, it’s all not necessary unless you want the gun to do some ridiculous stuff like a high ROF. If you use the gun normally there is no need for all of that.

The upgrades we’ve done are a lipo mod, but we now use the batteries from Titan, which are great by the way. We have the FPS upgrade with the m100 spring from Eagle6 and we use a BTC Spectre MOSFET inside, but that’s it. 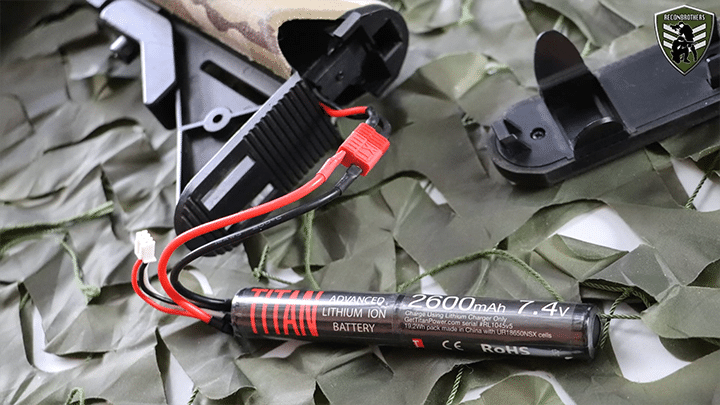 All these upgrades were done by our tech partner Airsoftdoctor here in Belgium, who did a great job by the way. And as said, we kept it to a minimum and the system still runs smooth.

Although we don’t tweak the MOSFET that much, it is a good way to protect system from failures. But it does make us question if it was worth the upgrade.

Overall view on the NGRS series

Overall it’s a very competitive and strong system straight out of the box. Remind that it’s performance with the FPS upgrade comes close to that of a Systema. It is a perfect system for those of you who want a bit more realism, but not at the cost of the AEG advantages. We still prefer it above the DAS GBLS due to the price and performance differences.

As said before. run it stock before tuning it and if you do so, make sure it’s done by somebody with experience and keep it to a minimum.

So, it’s definitely a recommended high-end gun and to answer the question you have been waiting for. Yes, it is worth it!

“Is It Worth Getting a Tokyo Marui Next-Gen Recoil Shock”