In this equipment blog we’ll be introducing you to one of the latest products you can find on our webshop. Today we will be fully covering the Reconbrothers Templar’s Gear 2020 Belt Setup.

But before we dig into this subject, make sure to subscribe to our blog page by filling in the form. Also Make sure to visit our Youtube Channel by clicking the button. Also have a look at our store shop.reconbrothers.com for your quality tactical stuff. And amongst those you can find Templar’s Gear products.

As you may know, we are official seller of the Polish Templar’s Gear brand for a while now and since we’re getting more familiar with their products ourselves we have started to create some combo packs.

Most of you that visited our shop already will be familiar with these. But for those that don’t know, we basically create full packs from a certain brand we sell according to our own experience. This can be an entire helmet, plate carrier, belt or anything else. 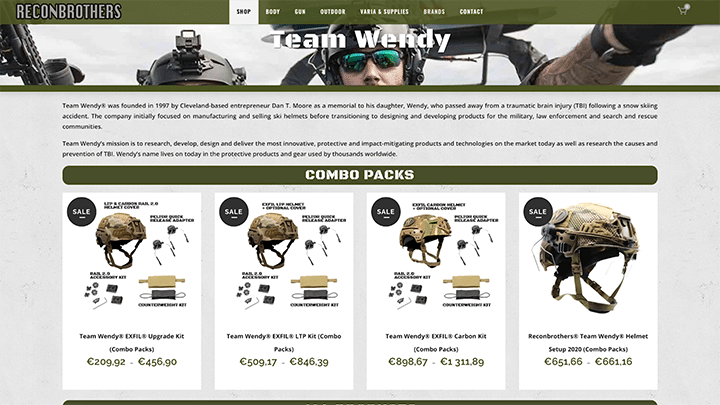 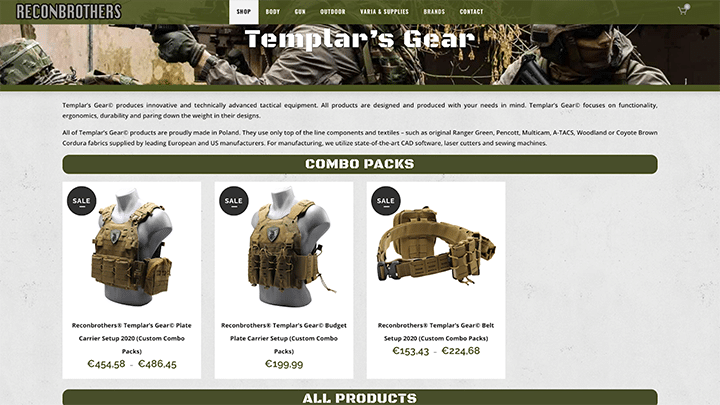 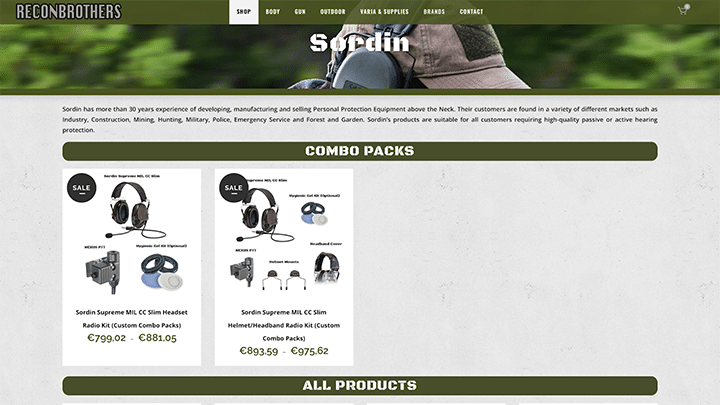 So, the belt which we will talk about in this video is such a product and is fully put together with Templar’s Gear products.

For you guys that are not familiar with Templar’s Gear. This company mainly focuses on creating products that are functional, ergonomic, durable and low weight. 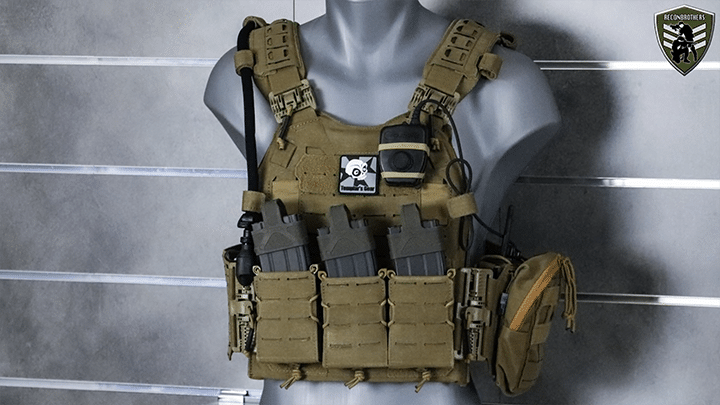 They are known for their laser cut designs, using top of the line materials and working with original colors and patterns like Ranger Green, Pencott and Multicam. In fact as good as 95% of their products can be found in one of their many different colors and camouflages.

To give you an idea, the counter is currently on 15. So if you require gear in a special camo, you most likely find it from them, through our shop obviously. 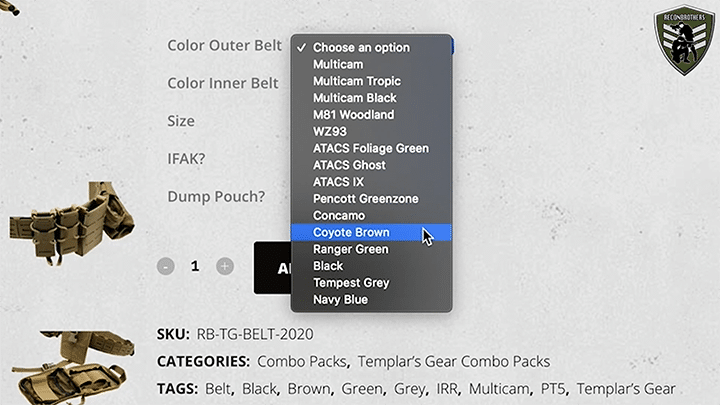 Also important to know is that they work together with, to name a few, the Cordura and Velcro brand, to use the legitimate and trustworthy materials. And when it comes to these Cordura fabrics, they use 500 den Cordura and Cordura laminate that is also IRR or infrared-repellent treated.

So, now that you’re a bit familiar with the brand, let’s jump into our product of today.

For starters, when my brother and I setup these sort of things we always keep 3 core fundamentals in mind, namely:

And also with this belt we applied that same principal.

Base Of The Setup

As a base we have used the Templar’s Gear PT5 Tactical Belt, because it’s constructed of an inner and an outer belt system. Whereas the inner one goes into your pants and the outer one with all your stuff goes on top and is attached securely with Velcro. 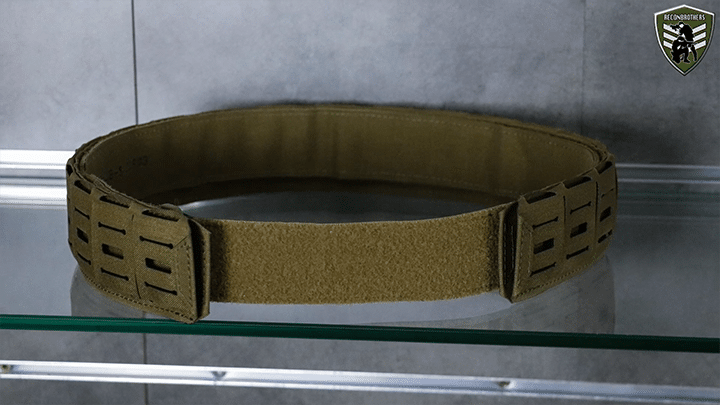 Of all the different belts we’ve used, these equipment type of belts are our preferred ones. Since they’re low profile and low weight, they hold the weight very well and are easy to put on or off with all your stuff attached.

This particular one is also constructed with laser cut PALS for all your MOLLE items which makes it an even better system.

Because we once had a belt without this, but it created the problem that once you started attaching more pouches, a lot of Velcro grip was lost due to too much material getting in between the hooks and loops layers. And with PALS you obviously don’t have that issue. 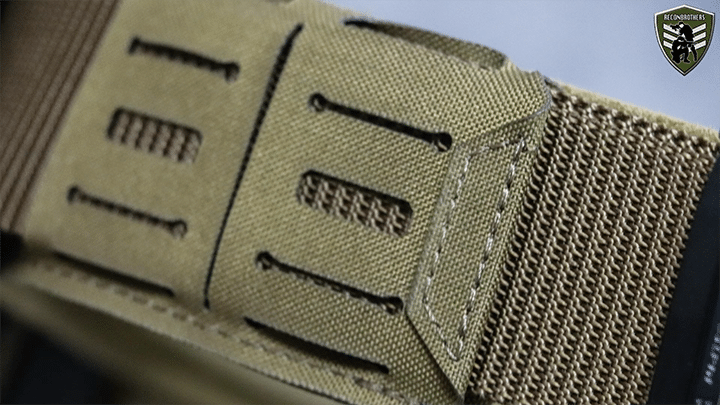 Extra Security For The Setup

The way this PT5 belt comes is perfectly useable on its own. But once you go into the more aggressive movements, you will require something with a more secure hold than just Velcro.

For this we added a tactical buckled belt to this pack as well. To be more specific, this is the Cobra ANSI Tactical Belt from Templar’s Gear which can be inserted into the outer belt. As in the name, this one features a metal AustriAlpin Cobra buckle that can take up to 18 kN of force. 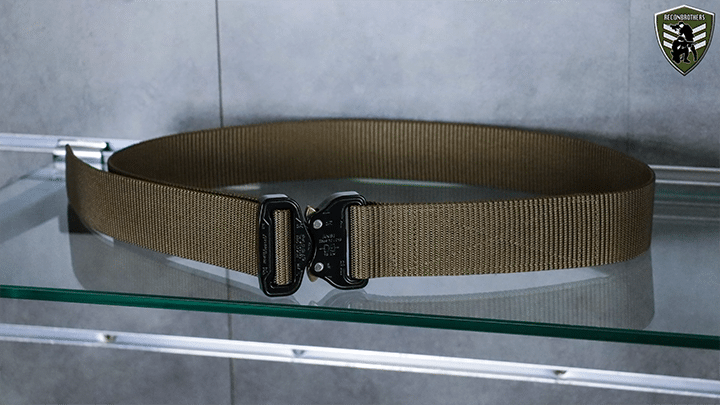 Here we’ve chosen to not use the D-ring version, since it’s more expensive and a very few amount of people actually use them.

Rigidity Of The Belt

The belt is 44 millimeters wide, one side adjustable and medium rigid. On its own this belt can be bend with some force, but once it’s combined with the PT5 outer belt it forms a really rigid whole.

This is important since once you start to add weight to the belt, like your pistol, magazines, a filled IFAK and so on, it needs to be able to hold all of that stuff. 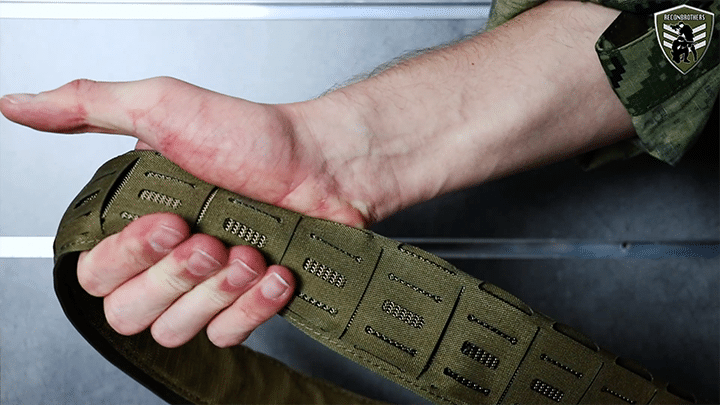 Having talked about the base, we’ll move a bit further to the pouches on the left side since we’ve taken right hand dominance as the standard. By the way, in between, the setup can be mirrored and thus is fully ambidextrous, so there’s no worry for you lefties out there.

These are what’s called Taco style pouches since they have these polymer lips on the sides. These lips allow for a very smooth grab and easy reinsertion of the magazines. And thanks to their open design, you can get quick access to them. 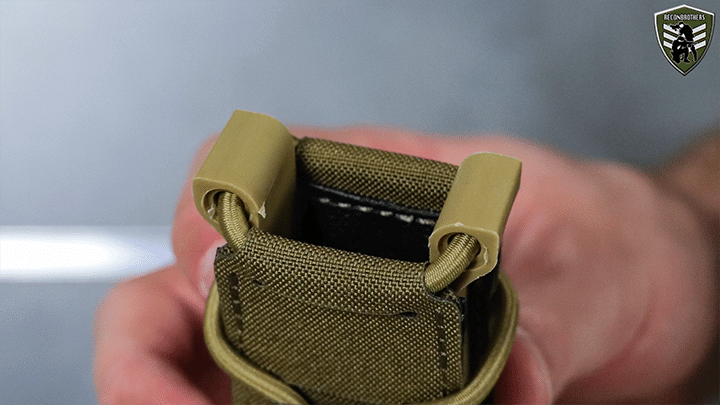 Even with their smooth draw feature, these pouches have a good retention. This is because they have an anti-slip rubber on the inside and you can tighten them however you see fit with their shock cords.

Why 2 pistol and 1 rifle pouch and why in this order?

To us, a belt mainly has the purpose to carry a certain minimum of essentials for when you don’t have your plate carrier with you. And also to be that first and fast accessible thing for when shit hits the fan.

And its on this fast accessibility we’ve focused with this. 2 pistol mags to have 3 in total, since one will be in the gun, and 1 very quickly accessible rifle magazine. The rifle mag is back faced since this is ergonomically easier to grab. 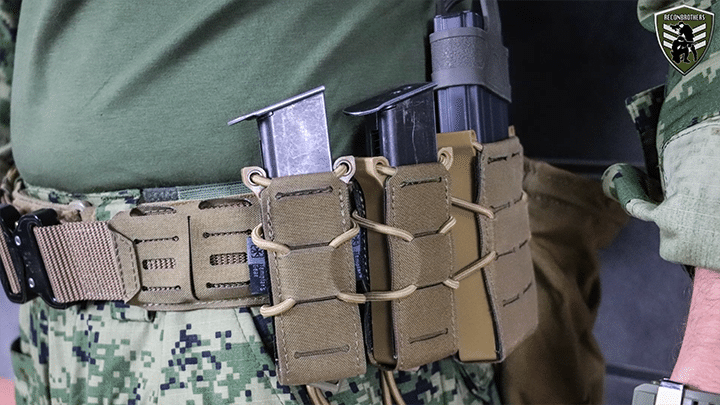 We also aim to keep the belt its profile as slim as possible, to maintain a good efficiency of movement. Think about movements like going prone, crawling and laying down sideways to shoot underneath something.

If your belt is heavily stacked and bulky, then that mobility freedom is lost. In fact the reason why we put these pistol pouches not directly on our front has to do with this mobility as well. At first thought, you would think the closer they are to my front, the easier I can grab that mag and do my reload. Which is true and very commonly done by range shooters. But if you would take a knee with such a setup, you’re practically sticking those mags into your lower belly and take it from us, that’s not really comfortable.

So, that’s about everything when it comes to the magazine pouches.

The Minimum The Setup Comes For

Just to be clear, everything we covered about the setup thus far, is the minimal the pack can come for. The pouches we’ll talk about next are optional since not everyone uses them.

So, going further down the belt, on the left back side, we have the Templar’s Gear Short Dump Bag.

And when it comes to dump bags, this is in our eyes one of the best designs we’ve seen. The bag can hold up to 4 rifle mags which is more than enough to us. 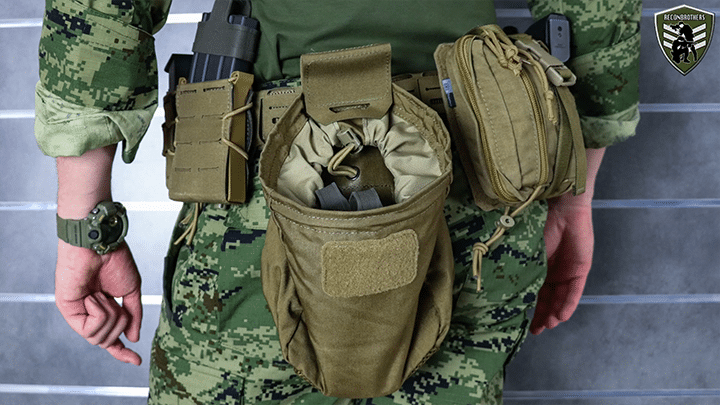 It features a shock cord closure system that allows you to adjust the diameter of its hole, so you can set it to your liking. However, here it is recommended to set it such that it’s pretty easy to insert an empty mag, but they can’t get out easily. 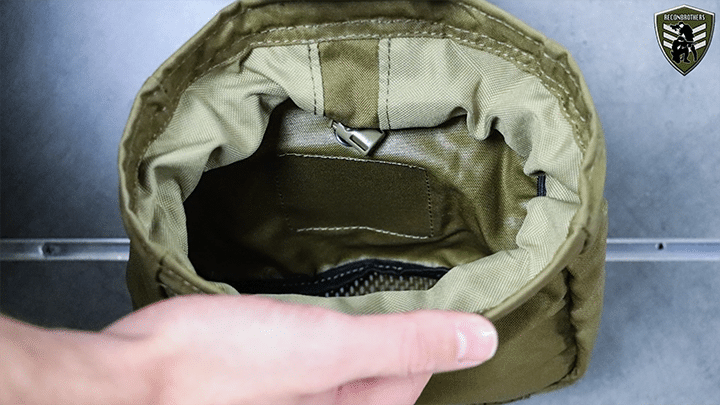 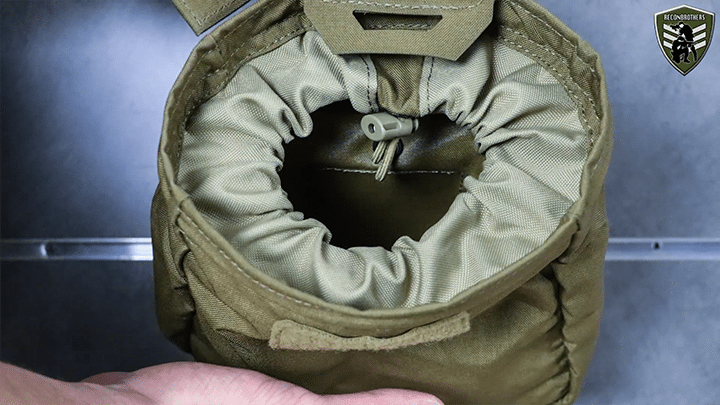 The bag can also be folded for a slim profile when not using it and even once it’s opened, you can still close the hole with Velcro to not accidentally loose mags when things get rough. 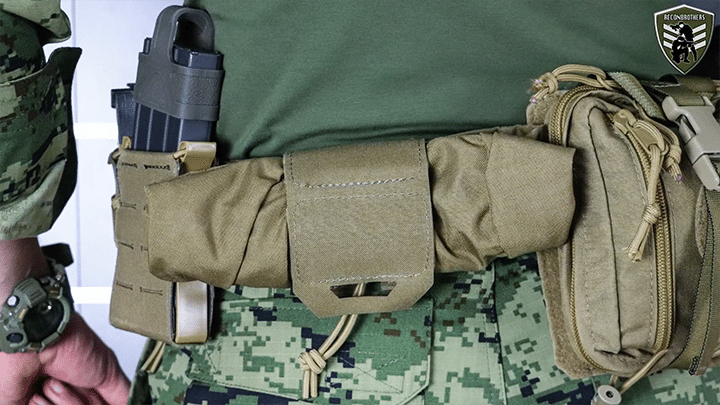 And most important to us when it comes to these is that it has an open profile thanks to it having a ring in its design. Because using one that doesn’t hold that open shape, is a pain in the ass to use. So having covered that, the next and last optional pouch is the Templar’s Gear Rip-Off First Aid Pouch.

For this we’ve added the Templar’s Gear Rip-Off First Aid Pouch. This one is a very convenient and well-designed IFAK. It basically comes in two parts whereas one is your MOLLE panel with Velcro hooks and the other is the pouch itself with a Velcro loops backing. 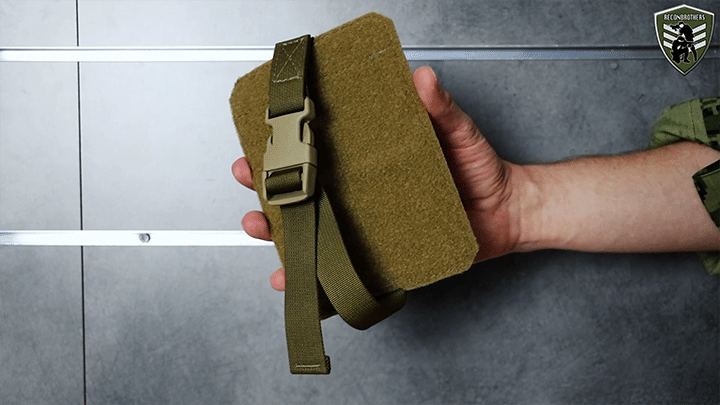 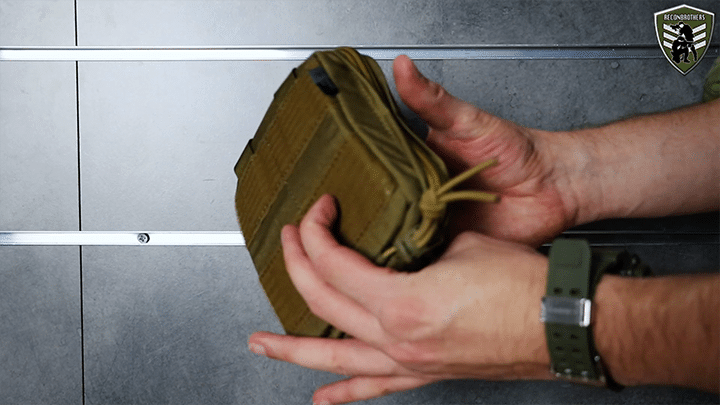 As an extra security, the panel also features a strap with buckle, so you can’t loose the pouch accidentally. 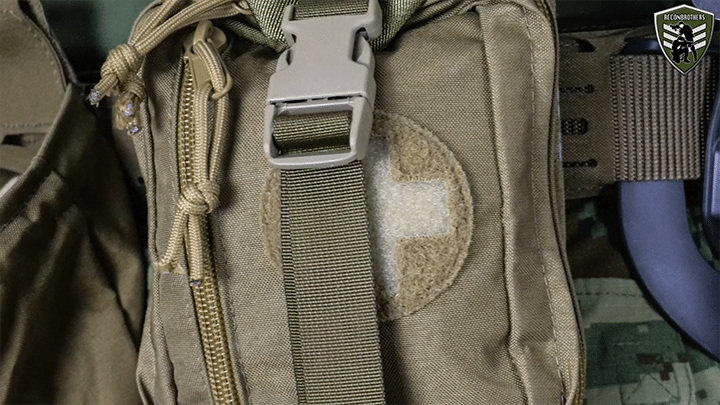 This Velcro style of design allows the pouch to be taken off and put back on pretty quickly and definitely belongs amongst the best designs we’ve seen. Plus this way, it also allows you to either wear it vertically or horizontally.

Another good thing we believe is important, is that its profile is not super large, even when it has been filled. Some IFAKs can be really big, even when empty and it’s not something we personally like.

We know it also depends on what you put inside them, but in our eyes this is a size that can certainly handle most people’s requirements.

Going further, on the outside of the pouch itself, it features a loop for easy grabbing when taking it off the panel. It also has some shock cord on the opposite side to carry a tourniquet. 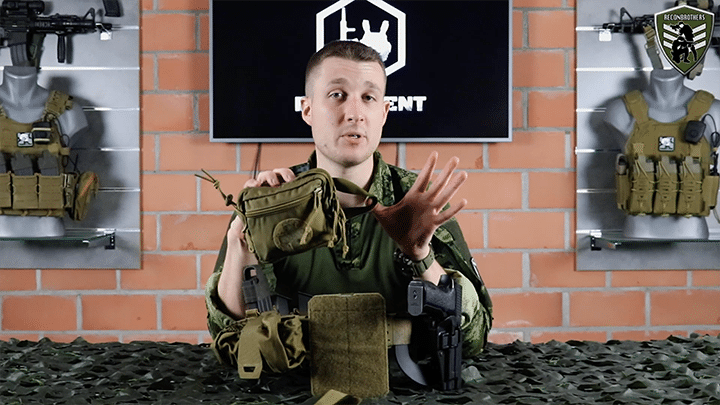 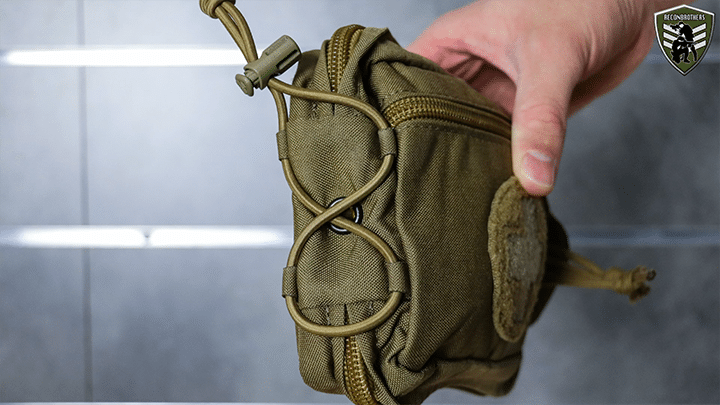 Above that, it also features a zipper pocket for small things and Velcro hooks shaped as a red cross. 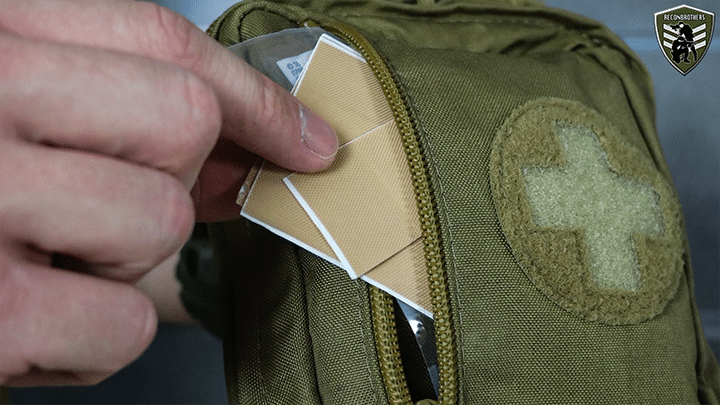 Furthermore the zippers on both sides can be entirely opened so you can lay it out and get easy access to your stuff.

On the inside, both sides feature mesh pockets to hold some of the big items in place and on top there are double elastic bands stitched to it to retain some of the smaller stuff. And that is it for the pouch itself. 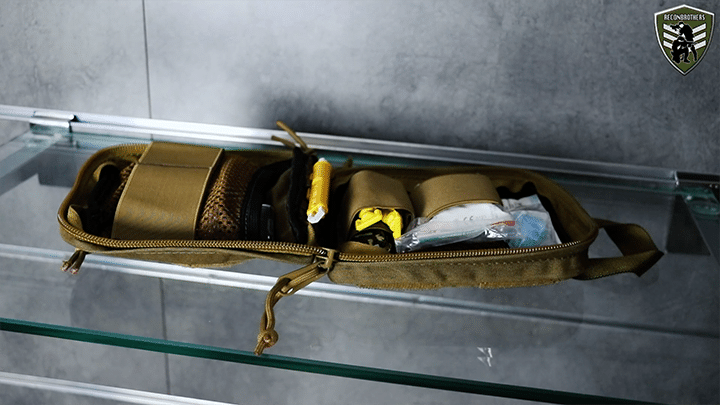 When it comes to positioning of the pouch on the belt, we’ve placed it on the right back side. Since we need the left side for the use with the dump bag, but we did do it in such a way that the pouch can be grabbed with both hands.

Not included, but important: Holster

Moving further we come to the holster which is of course not included in the setup, but we did want to mention how it can be attached.

Here there are 2 ways, you can either put your holster on the entire outer belt or you can partially get the buckled belt out of the outer belt its PALS slits and attach the holster there. 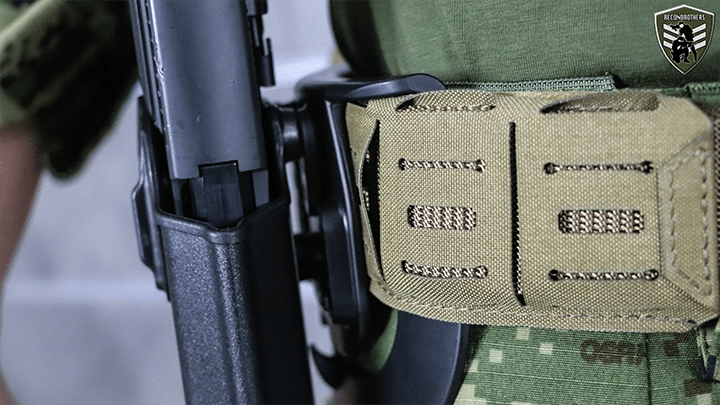 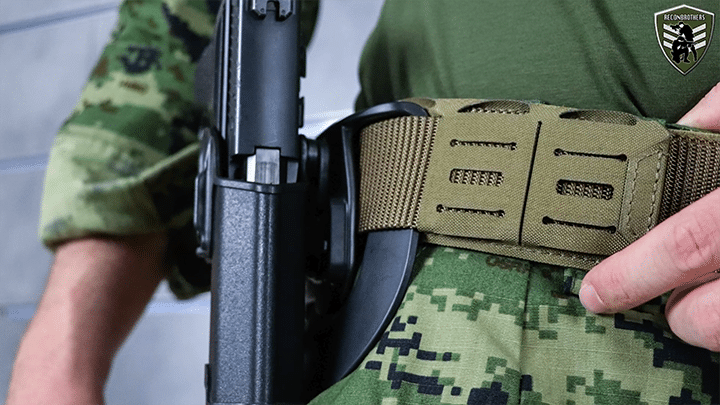 Anyway both are solid ways to have a fixed holster position, it will also depend on what mounting system you have for your holster, but do know these 2 ways are possible.

The whole set except for the belt with Cobra buckle is available in one of the 15 different color and camo options.

The buckled belt is available in coyote brown, olive drab or black.

All by all, it is a pretty simple looking setup, but in most cases simpler is better. And the quality is really top notch in our eyes. It features all the basics of what a tactically setup belt should have in our opinion and to us, the minimal setup allows you to easily build towards a belt of your own.

If you’re interested to get a version of these full belt setups with a discount, you can find them on our store shop.reconbrothers.com.