If you’re somebody that does things like real steel shooting, or gets in contact with explosions. Then having something to protect your ears is a mandatory thing especially knowing that any hearing loss is permanent and nothing will bring it back. Combine this with the need of proper radio communication and situational awareness and you’ll find yourself in the product range of active hearing protection.

The 3M PELTOR ComTac XPI is such a product and in this before you buy blog we’ll do a review of it. 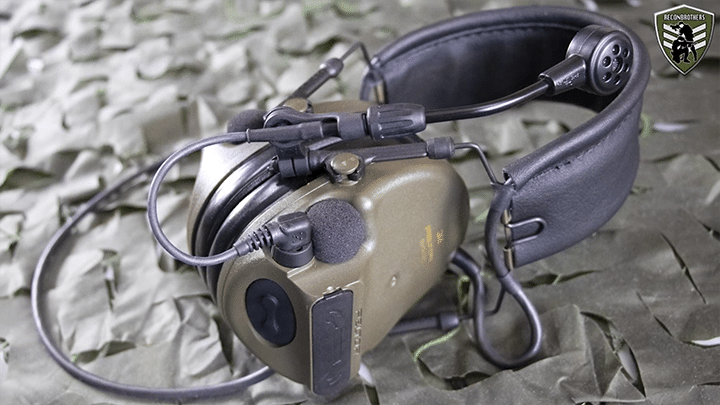 But before we dig into this subject, make sure to subscribe to our blog page by filling in the form. Also Make sure to visit our Youtube Channel by clicking the button. Have a look at our store shop.reconbrothers.com for your quality tactical stuff. Amongst those you can also find 3M PELTOR products.

To clarify, in this blog we will cover the ComTac XPI headset as well as the PTT available. One thing to notice is that the ComTac III in the USA is actually the ComTac XP from the EU but it has different wiring. This is the ComTac XPI which is an improved version of those models.

So that being said let’s jump into the builds of these products.

To start off with, what build options do you have for your headset?

You can get it in a black or olive drab color.

Other features you can choose,

To us this is also the best option since you can wear it as it comes, underneath a helmet or you can get yourself third party adapters for a helmet. But then you do need to cut the leather bridge wrap to free the cable.

No need to worry, you can still go back to a headband version since there are replacement wraps available as well. If you would like some guidance on how to go from a headband setup to a helmet mounted setup, you can have a look at the link in the image. 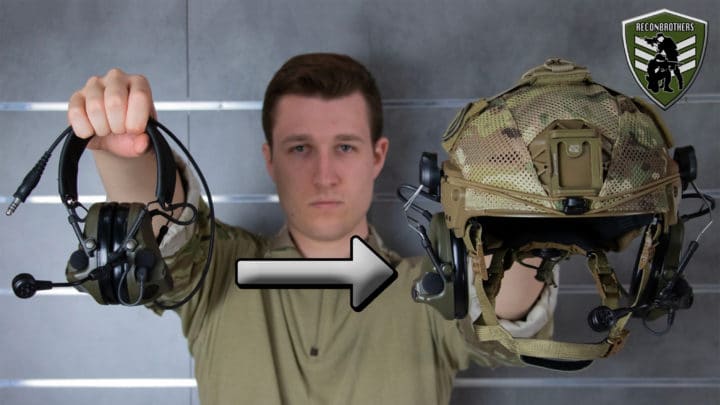 Another option is to get yourself a J11 cable to connect the headset with the PTT. This together with a detachable microphone, which can either be a dynamic or a flexible one. You do however also have a bone conducting microphone but it’s not so popular in usage. 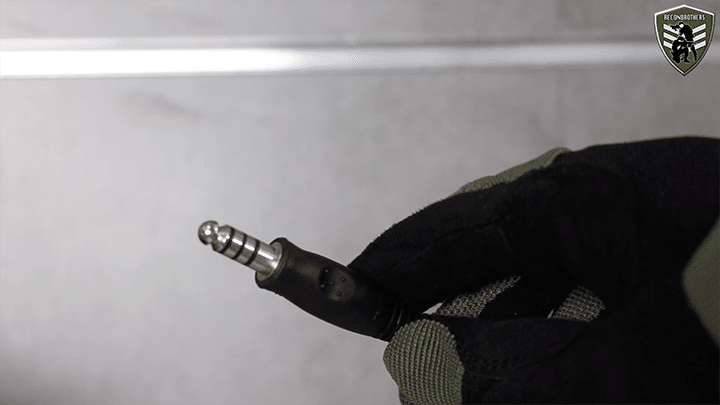 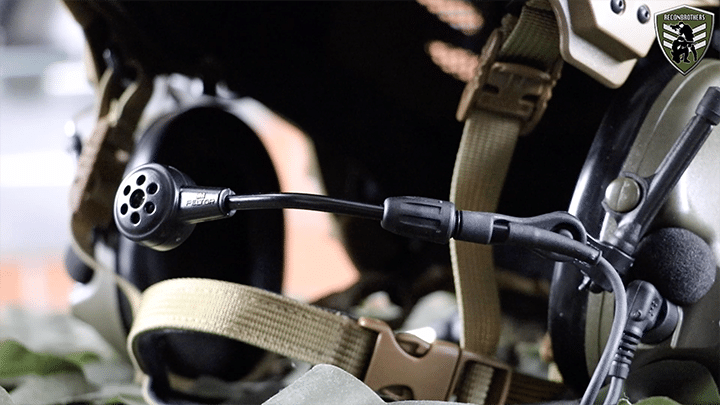 We ourselves chose to get a dynamic microphone and will mainly be covering this one today.

At last, you can choose to get yourself a single or double comm setup, which allows you to work with either one or two radios while only using one headset.

If you have a headset without any comm features, don’t worry we have upgrade kits available at our store. And if you are a left hand dominant shooter, the microphone may be on the wrong side for you. But also here you can use one of our upgrade kits to make it suitable for you as well.

The push-to-talk for this headset, comes in a matte black color and the options are dependent on the radio system you use.

The first one is a kenwood/Baofang PTT since they use the same pin. This one is called the FL 5035 and it’s made by PELTOR. 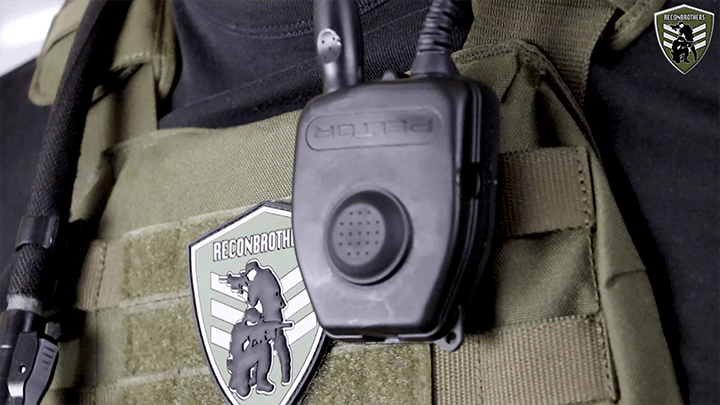 The other two options we have are for Motorola and Midland and they are both made by Comhead. Since PELTOR doesn’t make them anymore.

The two PTTs made by Comhead are definitely not inferior to the one made by PELTOR. In some way they are actually even better, but we’re not going to dive too much into these since we don’t have any personal experience with them. But just so you know the options are there.

Now let’s have a look into the quality of these products.

Starting off with the headset, it is tested to military standards so it can handle a whole array of extreme conditions. The standards are PPE directive 89/686/EEC, EMC directive 2004/108/EC, MIL-STD-810F and EMC-MIL-STD-461F.

For example, this means you can take the XPI on a swim for about an hour in fresh water and for about 30 minutes in salt water. Though, you can submerge with them it is not recommended to go too deep.

Looking at the build of the headset, the outer part of the ear pad is made of a strong plastic.

The clips holding the headband and the ear pads together are made of plastic and can apparently break, if you’re not careful dismounting or mounting them. 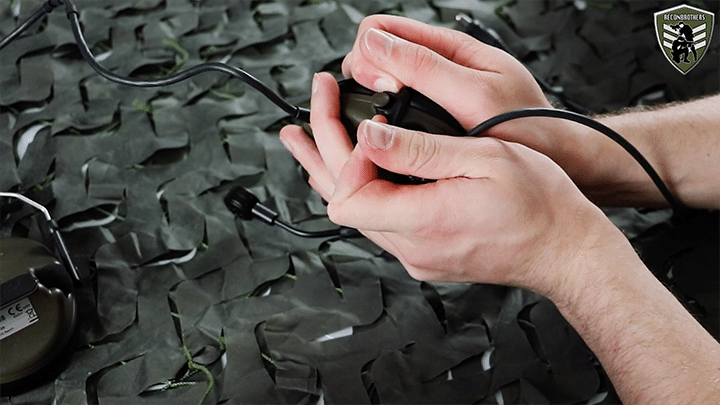 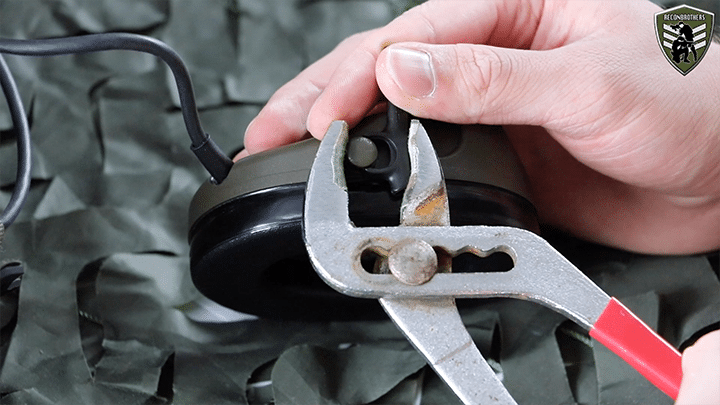 If you want to interchange between the headband and the helmet mounted version. It’s best to take out the metal bars instead of the clips.

As for the bridge it is made out of a brass metal bridge, which is finished by a leather wrap. 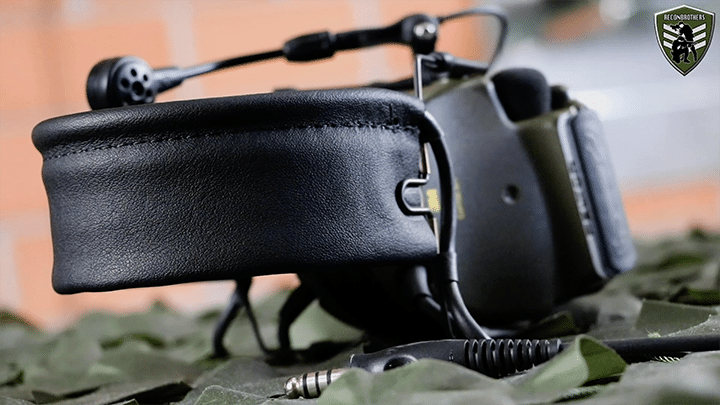 On the bottom of the left ear pad you have two buttons for your menu which are easy to distinguish even with gloves on.

The menu buttons are easy to use. Simply push one of them a couple of seconds to turn system on or off. If you want to change the volume you can press the front button to amplify your sound and to reduce your sound you can push the back button.

The battery compartments on both sides of the headset are easy accessible, made of plastic and also waterproof. Just so you know the headset itself uses two AAA batteries. 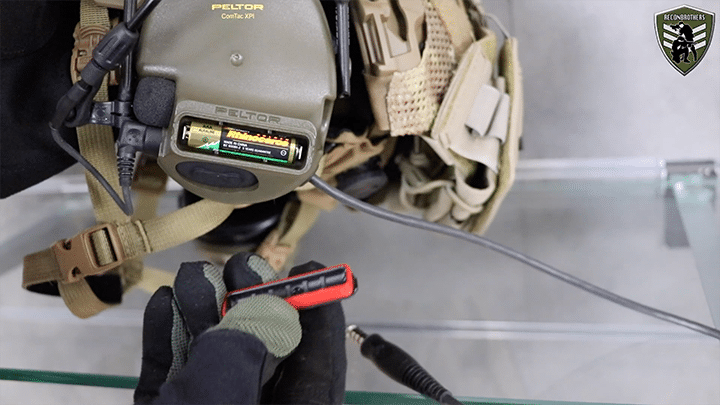 The standard foam ear-cushions provide a good seal around the ears and feel comfortable around the head. 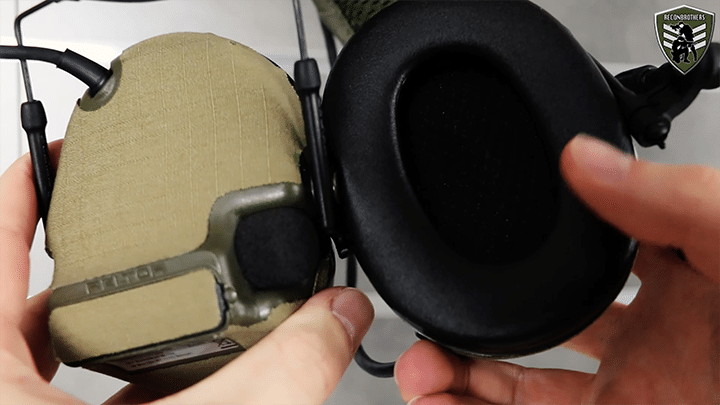 At last the cables on the system are very solid built and all by all it feels like the headset can go through some pretty brutal stuff. 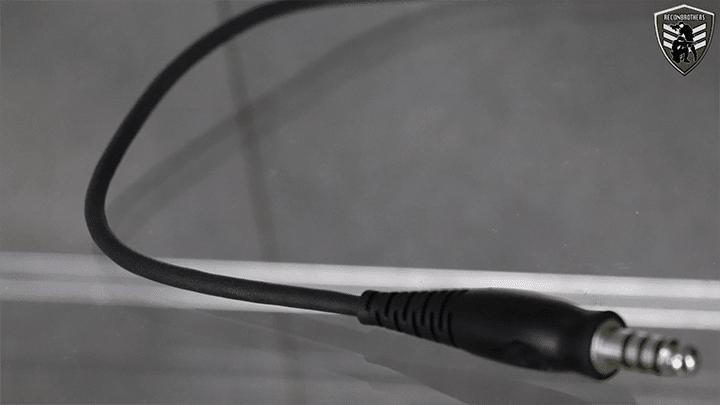 The headset is quite adjustable which allows a fit for most people. 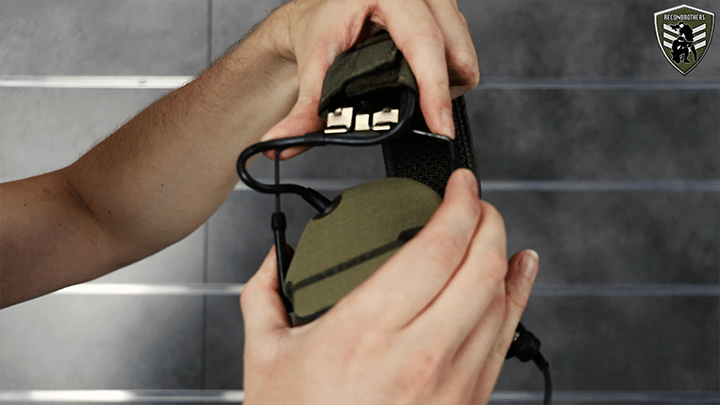 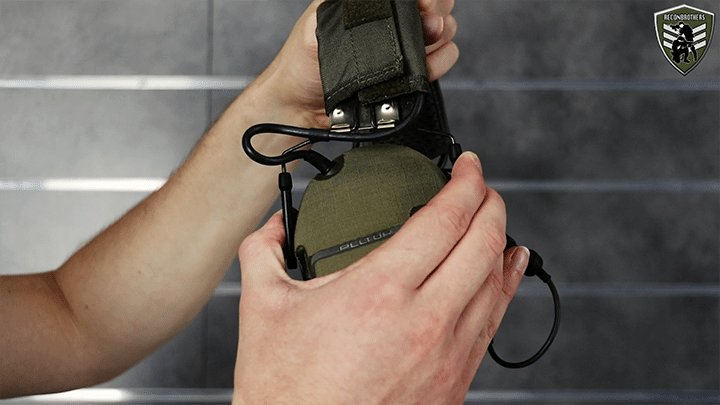 For easy storage and transport usage the headset can also be folded. 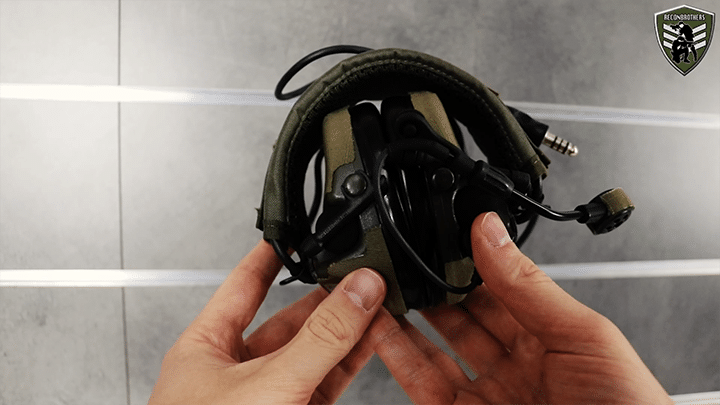 Let’s have a closer look at the microphones themselves. The dynamic microphone is length adjustable and uses rotation points to determine positioning. Whereas the flexible microphone has a fixed length but is a bit easier in use. 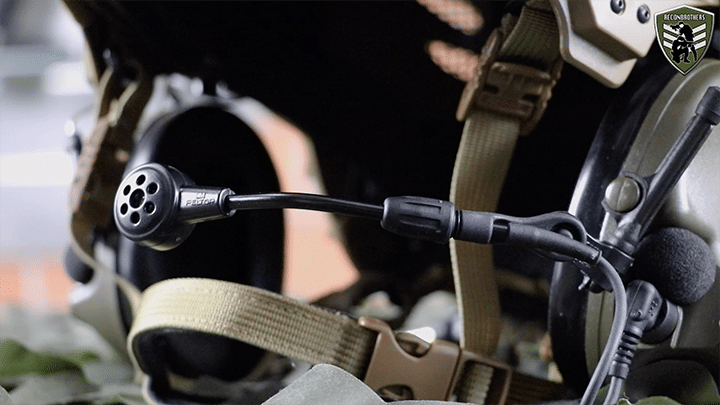 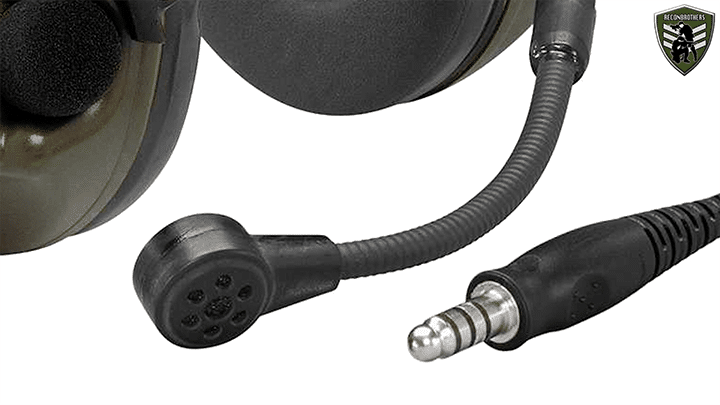 Both microphones are IP68 rated which means they are dust tight and waterproof for 30 minutes up to 3 m. They also featured an ultra noise canceling feature which is especially important in windy conditions.

The J11 cable is also a tough build, and the jack is an absolute solid piece which is something entirely different than your usual 6 mm jacks. So it won’t break easily. 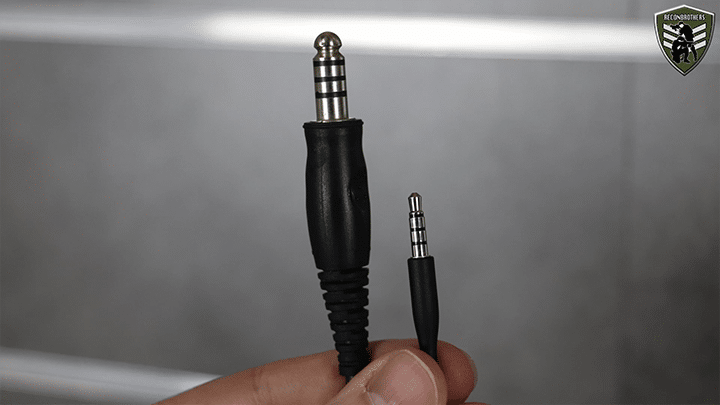 Going over to the PELTOR PTT it is also IP68 rated, meaning it is also dust tight and waterproof.

The PTT its casing is built of a tough plastic, and the cable is made the same way as the cables from the headset, so they can take on some rough conditions as well. 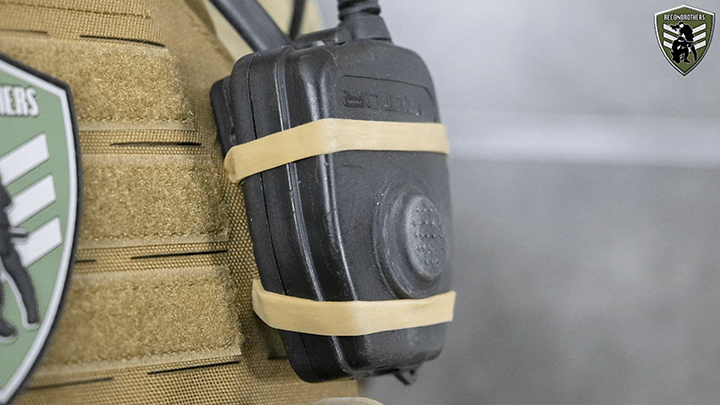 The PTT features a textured button which is easy to locate without the need to look, and is easy to reach with both hands.

It features a clamp on the back that can be rotated 360 degrees, and it can be removed by removing a single screw. 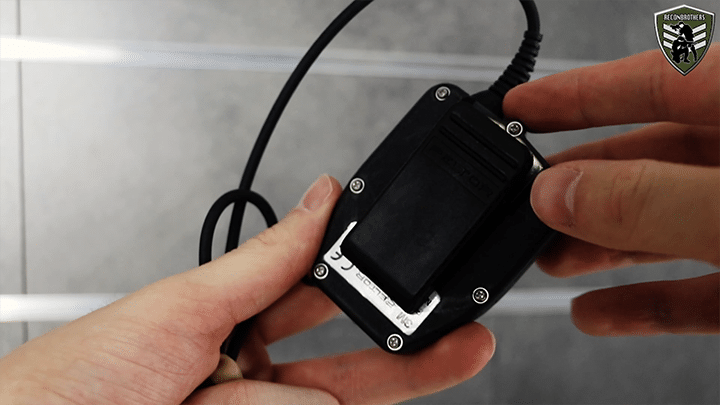 Now that we have covered all of this, let’s go over to the features of both products.

This is due to the two external microphones that take in the sound. The system then decides what to do with it. Either block it or have it passed through the internal speakers at a normal or enhanced level. 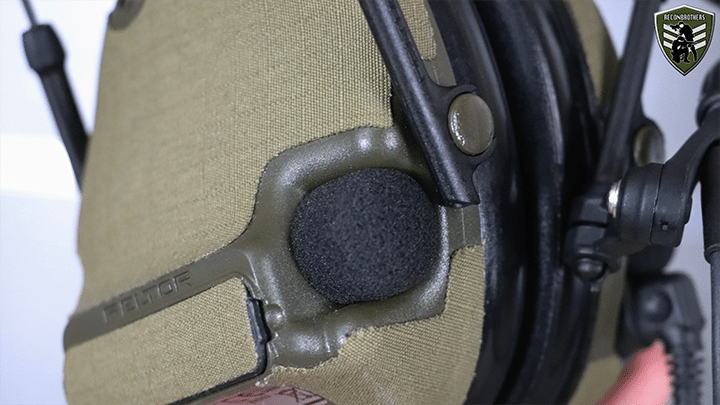 The sound produced by the internal speakers can be increased or decreased in 4 levels with a maximum output of 82 decibels.

The configuration menu is fully voice guided and allows you to change some functions.

One of these functions is the release time that can either be slow or fast, whereas the slow one is used for indoor shots. Whereas the echo of the shots can create sound shocks.

Next up, is the volume balance between the ears which can be put on seven different settings. This is for example useful if you have hearing loss on your left ear, you can amplify the sound output of the left ear pad to regain your situational awareness.

Above an equalizer mode which are the 4 different sound levels we talked about earlier, this system also features a silent mode which shuts off the external microphones.

In total wearing the headset as it comes, gives you an SNR or signal-to-noise ratio of 28 decibels. If you require a higher reduction of decibels you can also wear earplugs underneath a headset which brings the total up to 39 decibels.

Remind that when it comes to volume every 3 decibels is a doubling of the sound energy. So 11 decibels is quite a lot. This is all good in terms of protection, but a problem that it usually brings along is that the output of the speakers is reduced too much as well. For this the system features an ear plug mode, this enhances the speaker output by 6 decibels, so you can keep your communication and situational awareness with earplugs on.

The headset in total weighs 335 grams with batteries included. it can operate between -40 up to 55 degrees Celsius and it has an average runtime of 200 hours, but our supplier with much more experience says it can go even up to 300 hours.

Next up is the PTT.

It has a button with a very positive feel that ensures you are transmitting even with thick gloves on.

The PTT has also been tested and approved for a minimum of 100,000 plugins with the J11 cable.

Now that we have covered all of this, let’s have a little demonstration of the headset. For this we recommend you to watch the video since this is an audiovisual demonstration. The demonstration itself starts at 9:48.

If you are looking for 3M PELTOR products like the ComTac XPI or accessories you can head over to https://shop.Reconbrothers.com/Body/Comms and buy your needs over there. We also offer combo packs to make it a little bit more affordable since they have a small discount.