Today we will be testing the performance between low-budget AEGs all the way up to high-budget AEGs.

What is an AEG and how does it work?

What is an AEG? An AEG is an Automatic Electric Gun. How does it work? It works by a battery that powers a motor, the motor winds some gears and the gears move a piston that creates airflow for the BB to travel along the barrel.

The AEGs we will compare

The 1st gun we have today is the Lancer Tactical 02CL-G2. This is a low-budget AEG or an entry-level gun and comes around 150 euros. It is based on the old-school gearbox we all know well about and it doesn’t feature any sort of recoil or bolt-catch. 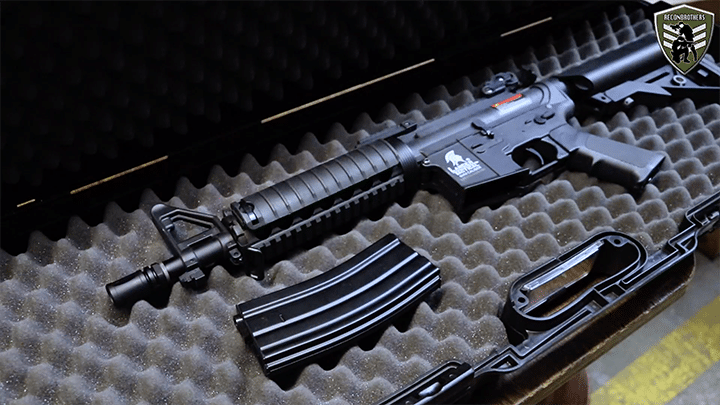 The 2nd gun we have is the G&G CM16 SRL. This gun is considered to be a mid-range AEG and comes around 270 euros. It also features the old-school gearbox and it doesn’t provide any sort of recoil or bolt-catch. 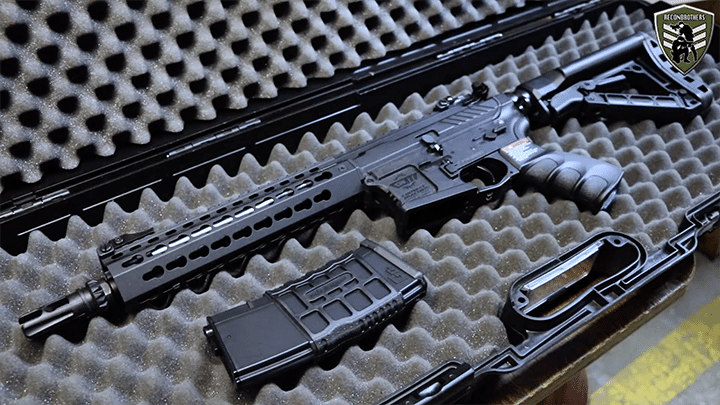 As for the 3rd gun we have the Tokyo Marui HK416 Delta Custom Next-Gen AEG. This gun is a high-range AEG which comes around 650 euros. It features a tweaked gearbox to offer recoil, which is not that strong, but it also has a bolt-catch to indicate when your magazine is empty. 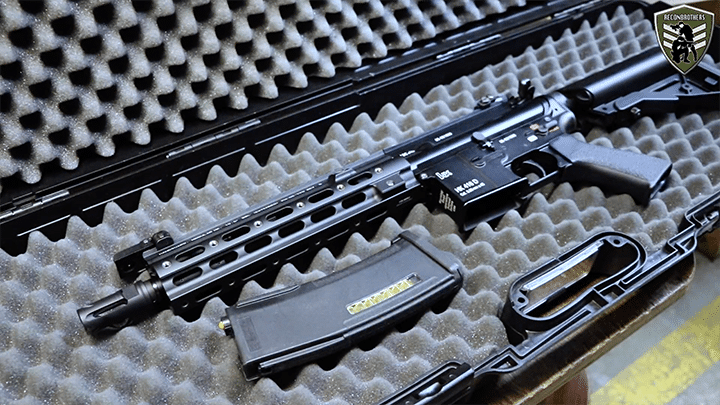 For our 4th gun we have the Systema PTW which comes around 1700 euros. This one works quite a bit different than the other ones we’ve already shown you, because this one has an external piston that moves on gears that sit inside the lower receiver. This gun doesn’t feature any sort of recoil, but it does feature a bolt-catch. 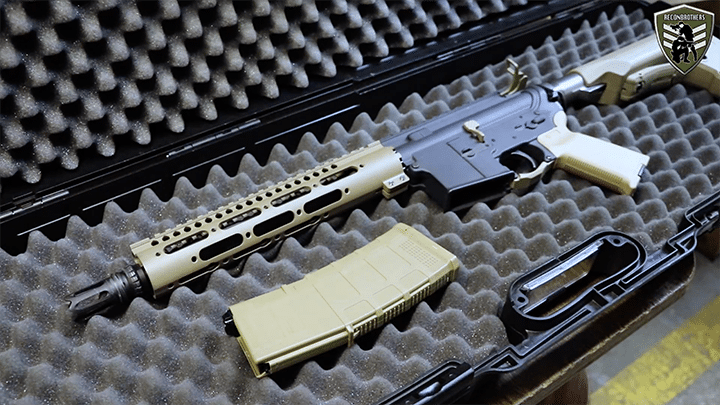 The last AEG for today is the DAS GBLS, which comes around 1600 euros just for a basic kit. This one also has an external piston that moves on gears just like the Systema does, but what truly makes this a different breed is the fact that this one has a functioning bolt. This means that it provides recoil that’s almost comparable to a gas blowback rifle. It also features a bolt-catch. 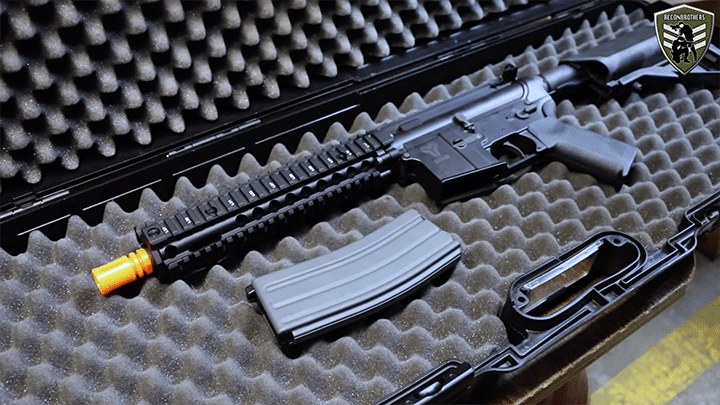 All these AEGs are stock and in order to eliminate as much variables as possible, they all have about the same barrel length as well as the same FPS output. That means that the Tokyo Marui needed a small spring upgrade in order to reach that European FPS level.

We would like to thank Airsoftdoctor for providing all these guns to make this video possible.

To make these tests as representative as possible, we as scientists like to eliminate as much variables as possible. For this reason we decided to let Viper do the shooting, because, his eyes are better and he’s the better shooter out of the 2 of us.

Besides that, we have chosen to use a table as our stable platform and Viper we’ll be taking on a hold named the “Sniper hold”. This because it eliminates as much movement as possible. 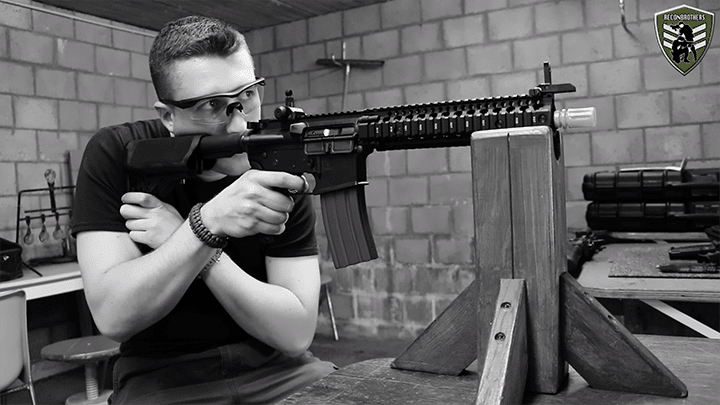 The range we’ll be using is a 50 m range that has walls build on both the left and right side. This enables us to test in an environment that has barely any wind, which is also a factor we wanted to eliminate as much as possible. 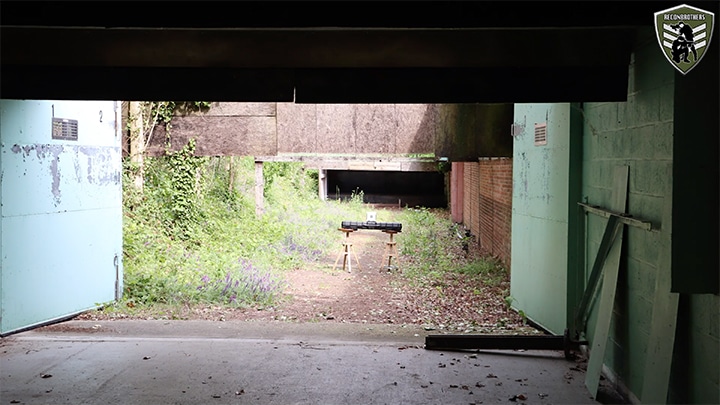 As for the first test we will put the target at the back end of our range which is 50 meters and then we will put it closer until we can hit the target 5 times in a row. Once that’s done we’re going to use the rangefinder to indicate how far the target is standing at. 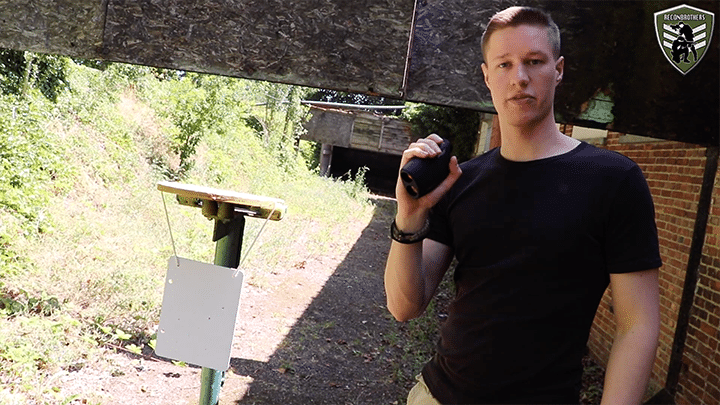 From our first test we can clearly see a big difference in effective ranges when it comes to these AEGs.

The worst performer was the G&G with 28 meters and after that the Lancer performed a bit better with 30 meters. So it’s safe to say they have about the same effective range of about 30 meters.

The next 2 that performed a bit better were the DAS GBLS with 34 meters and the Tokyo Marui NGRS with 35 meters. Also these perform about the same when it comes to the effective range which is 5 meters in difference or 17% better than the G&G and the Lancer Tactical do.

That being said, the one that has by far beaten them all, was the Systema. PTW with 39 meters or 30% difference compared to the 30 meters of the G&G and the Lancers Tactical.

Now, we know you can hit people farther away with an Airsoft gun than 40 meters, but then you’re either over hopping, aiming higher up in the air or can’t hit your target which each and every single shot, so then you’re more spraying and praying rather than shooting at the gun’s effective range.

Here we are going to measure the precision of each gun on its maximum effective range. For this we replace the steel target by a card target which will allow us to collect data. 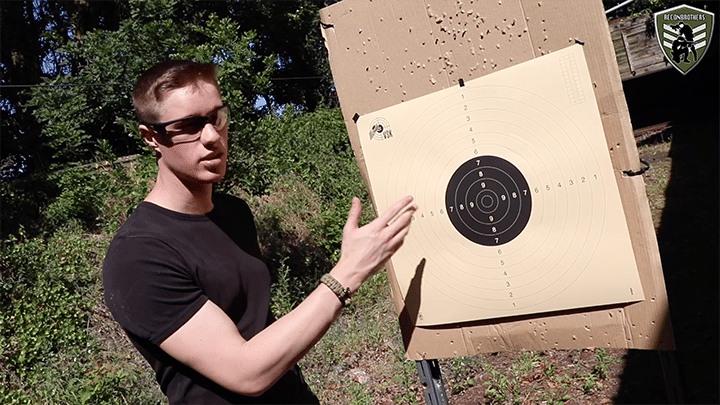 From test 2 we can see that the Systema PTW has a smaller grouping, besides having a bigger range, compared to the Tokyo Marui and that’s why some people want to spend a big amount of money on a Systema. 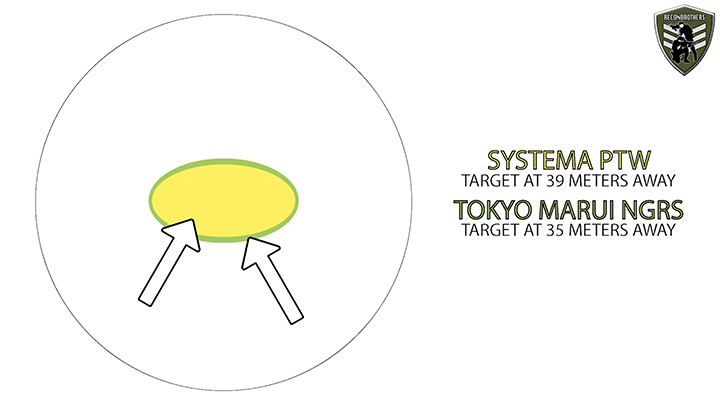 So now that we have collected our data from test number 2, we can easily see that the G&G has a shortest maximum effective range at 28 meters, so that’s where our target is standing at for test 3. For test number 3 we’re going to use all of the other guns to see what their precision is at the same distance so we can compare them to each other.

From this test we can clearly see a difference in precision or grouping between all the different guns.

And that is exactly one of the reasons, besides more quality materials, why you pay more for a mid-range AEG like the G&G. The difference in grouping comes from the G&G having a more refined hop-up unit than the Lancer Tactical does.

Let’s first begin with the G&G and the Lancer Tactical that shot about the same effective range from test number 1. Although the Lancer had 2 more meters in effective distance the G&G had about 65% less spread than the Lancer tactical which is a huge difference.

To be more precise Tokyo Marui was about 21% better at its precision then a DAS GBLS was. This obviously has to do, because of the stronger recoil the DAS provides compared to the Tokyo Marui.

As for the Tokyo Marui NGRS and the DAS GBLS, which also performed about the same in range, differ quite a lot when it comes to grouping. 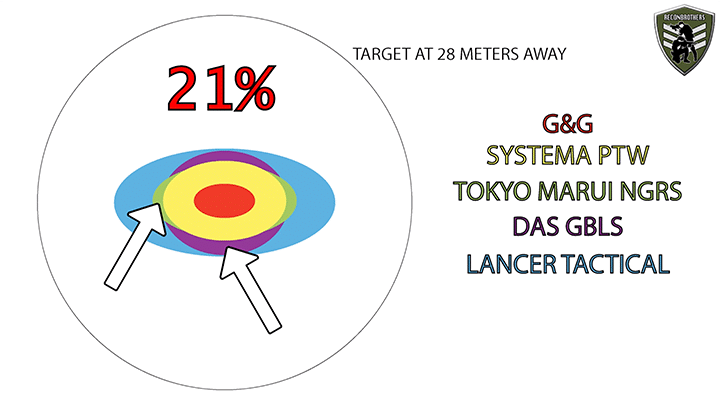 When we take a look at the Systema PTW, we see that it’s grouping is fairly close to the one from Tokyo Marui which only differs about 6%. If we compare the Systema to the best performer at 28 meters, which is the G&G, it still differs 15% in grouping. 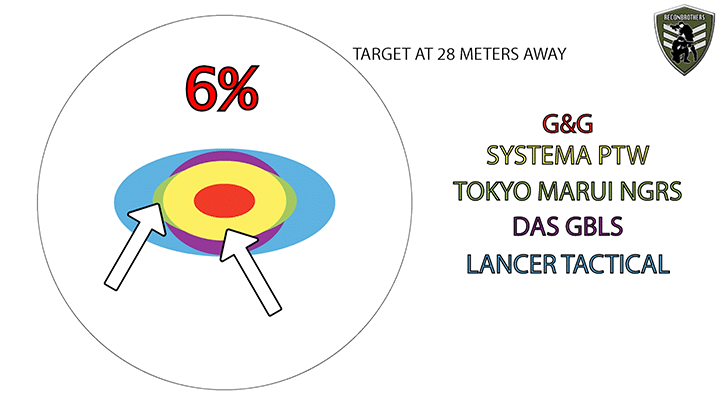 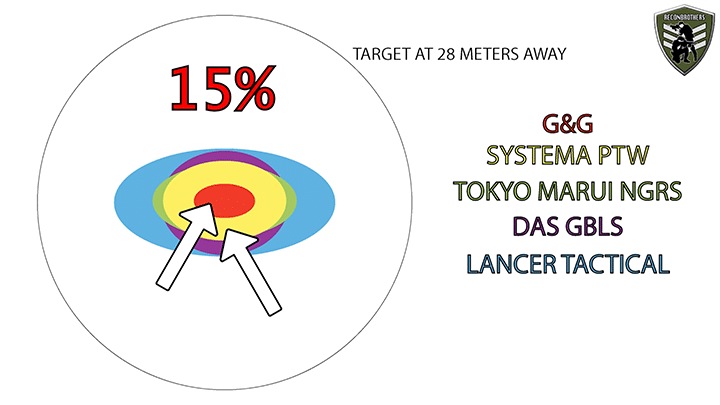 If we would go “under the hood” of these machines we can explain a few of the things we’ve concluded from our tests.

Why do these AEGs differ so much?

The explanation can be found with how the inner barrel, hop-up, magazine and the air nozzle of the piston are built.

For this the regular old-school gearbox AEGs require a freedom of movement from the inner barrel and hop-up in order to insert and fit a magazine, but the more freedom a barrel has, the more the air from the air nozzle hits the BB on another spot and the less consistent to hop-up will create the hop-up effect. This translates itself in less effective range and less precision with each shot.

Tokyo Marui has solved these issues by building and inner barrel system that provides less freedom and a longer air nozzle to make the air hit the BB in a more precise way with each shot and that’s why we see both a better effective range and a better grouping.

As for why the Systema PTW outperformed all of the rest, has to do with it being designed for the purpose of being very precise.

How did they do that?

Well, the hop-up, barrel and entire piston lock shut inside the upper receiver to minimize any possible movements and also the fact that the Systema doesn’t provide any sort of recoil only helps in it being more precise.

As for the DAS GBLS you can compare its whole system as a hybrid between a Systema PTW and a GBBR or Gas BlowBack Rifle. So it also locks shut like a Systema does, only thing is that its heavy recoil widens your grouping like seen from our data.

But what about upgraded low/mid-budget AEGs?

You could say what about an upgraded low-budget or mid-range AEG, how will that perform?

Well, the fact is you can put all your money into it to make it perform better, which it will, but will never perform equally as good or better than the other systems. This is because their built is inherently different compared to the higher range AEGs and as long as you have that freedom of your inner barrel and hop-up, you will never shoot any better with these airsoft guns.

So our conclusion from these tests is quite simple: 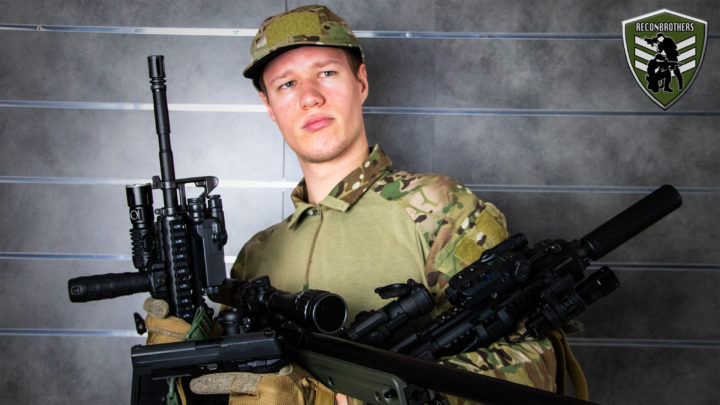 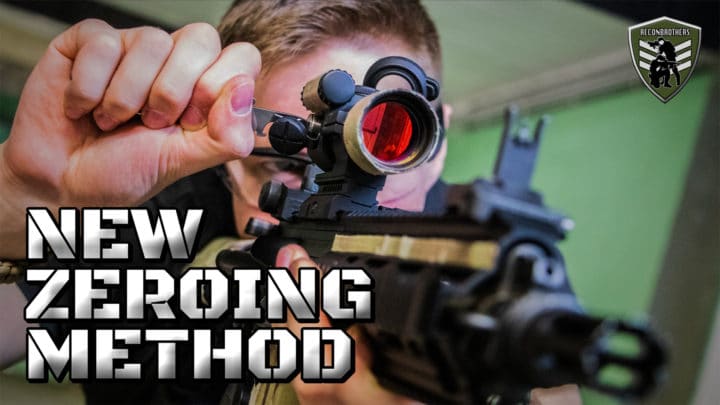